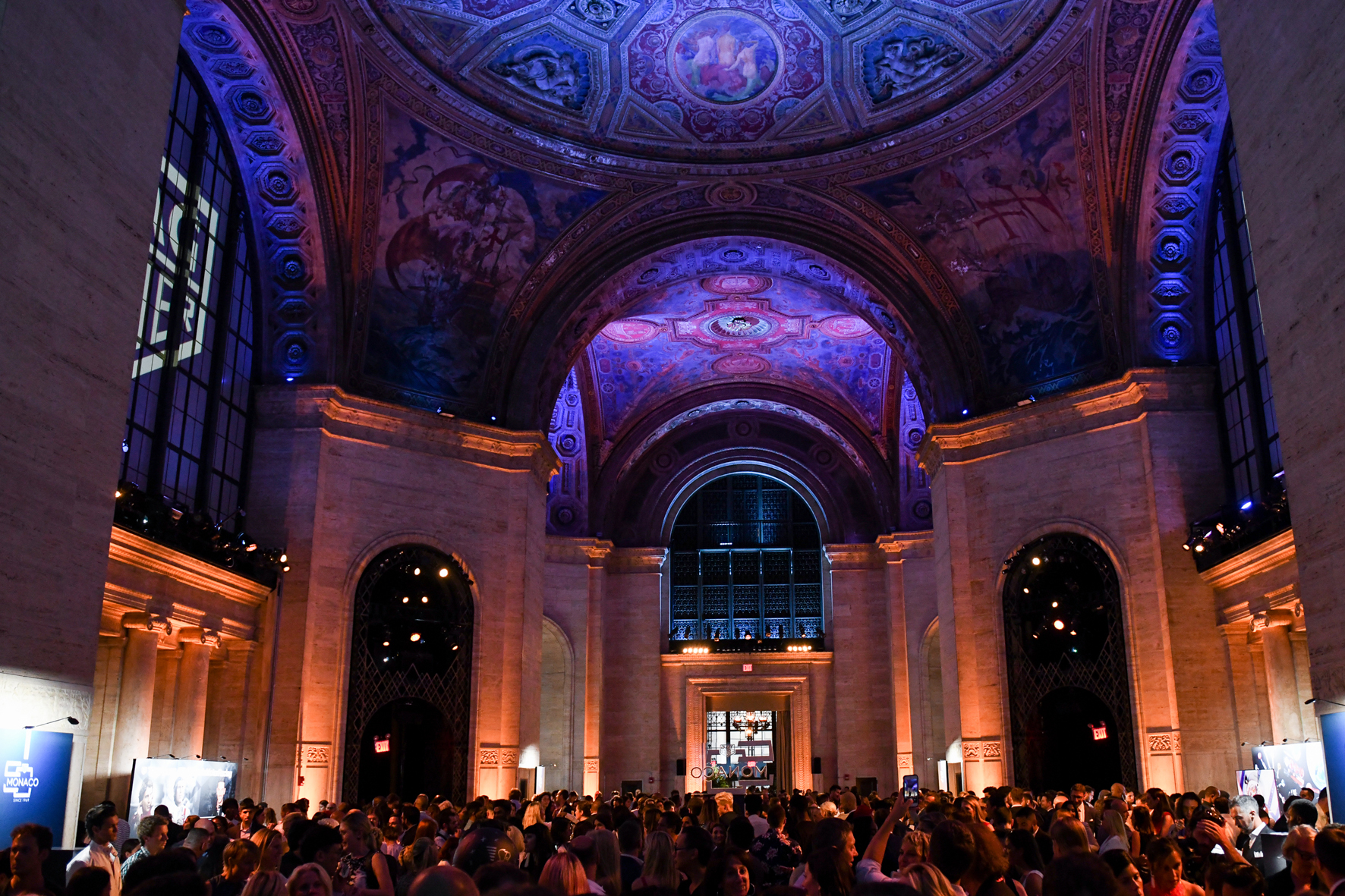 The exclusive event was attended by brand ambassadors race car driver and 2017/2018 Formula E Champion Jean-Éric Vergne, Hollywood actor Patrick Dempsey, and former Miss Universe and friend of the brand, Paulina Vega, who was the host for the evening’s festivities. 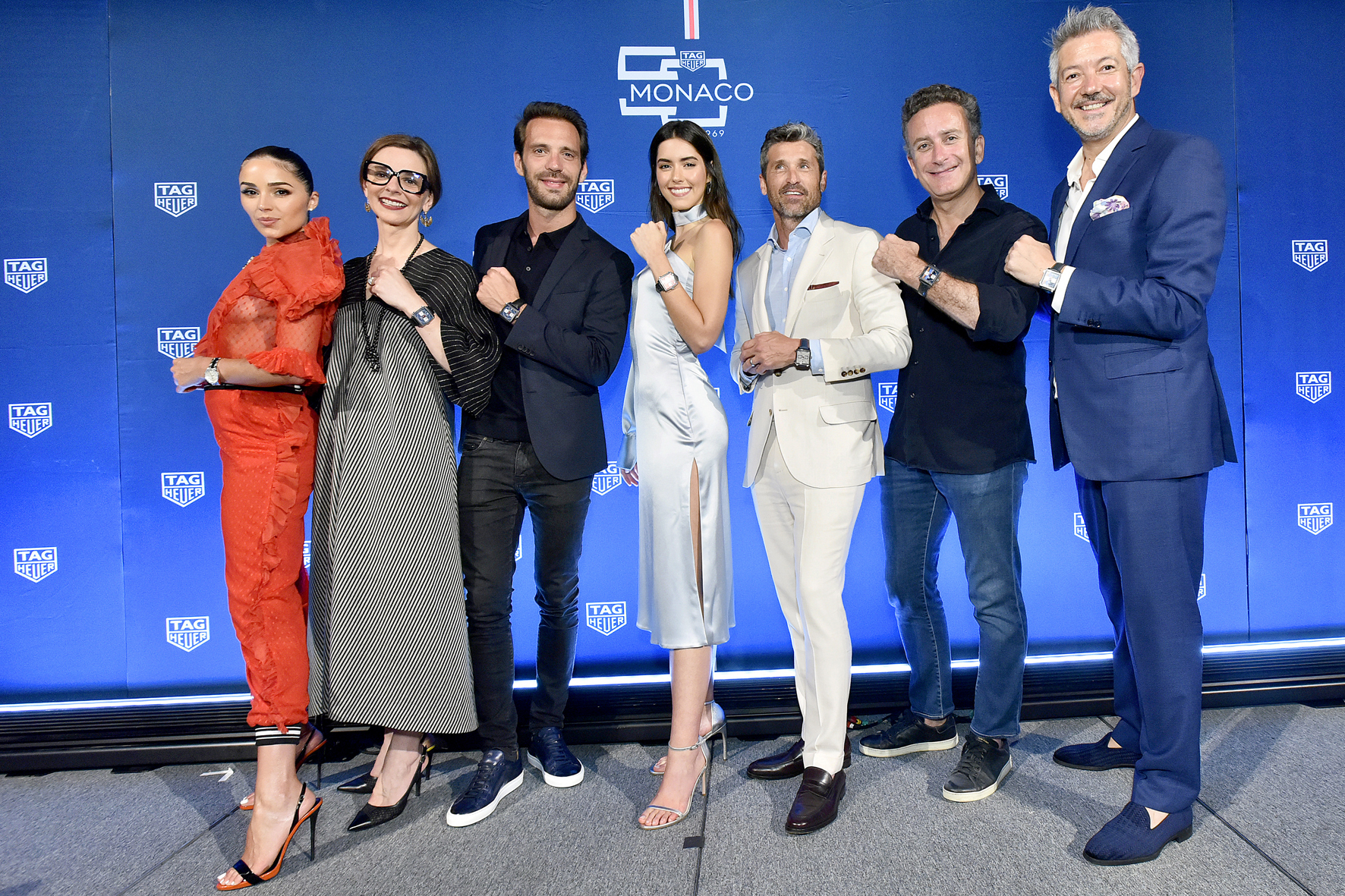 Upon arrival, guests walked through a TAG Heuer heritage exhibition before entering the majestic event location. To unveil the timepiece, a spectacular light show illuminated the grand hall with neon lights and video projections showcasing the history of the TAG Heuer Monaco, leading up to the reveal of the latest limited edition inspired by the 1990s. 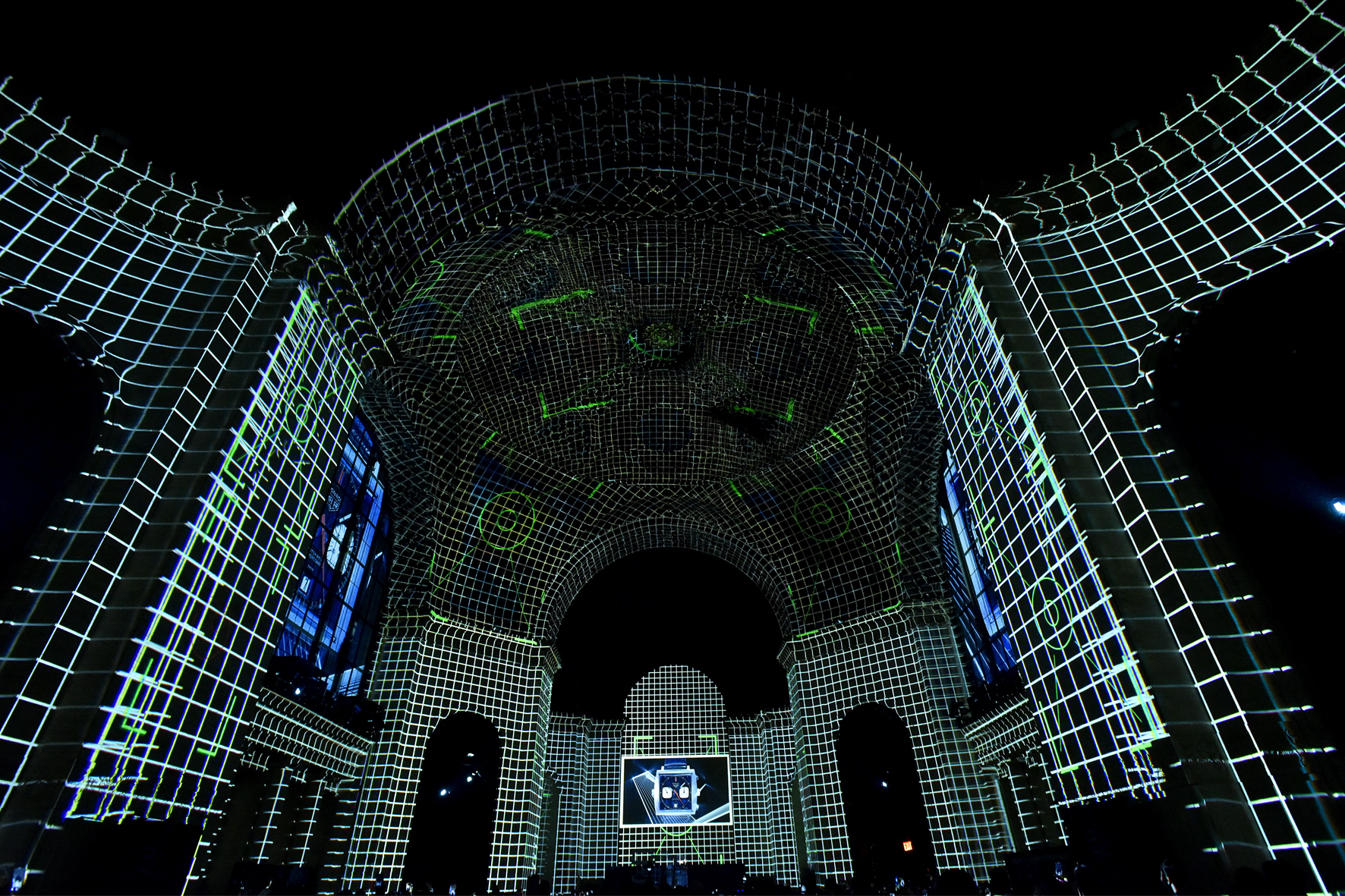 The third of five limited-edition tributes to the Monaco takes its inspiration from the themes, styles and trends of the 1990s. With a steely industrial appearance reflecting the straightforward street style characteristic of this beloved decade, this special collector’s edition features a blue and silvery appearance with dynamic red elements. The stainless-steel square chronograph has a grained rhodium-plated dial with sandblasted subdials featuring blue counters. The flange and Heuer logo are in blue, and the indexes and central seconds hand are red. The blue of the Heuer logo and minute and second scales counters provides a bold contrast to the red touches on the hands and indexes and the red motif featured on the dial. This colour scheme continues with the blue perforated calfskin strap with red stitching. 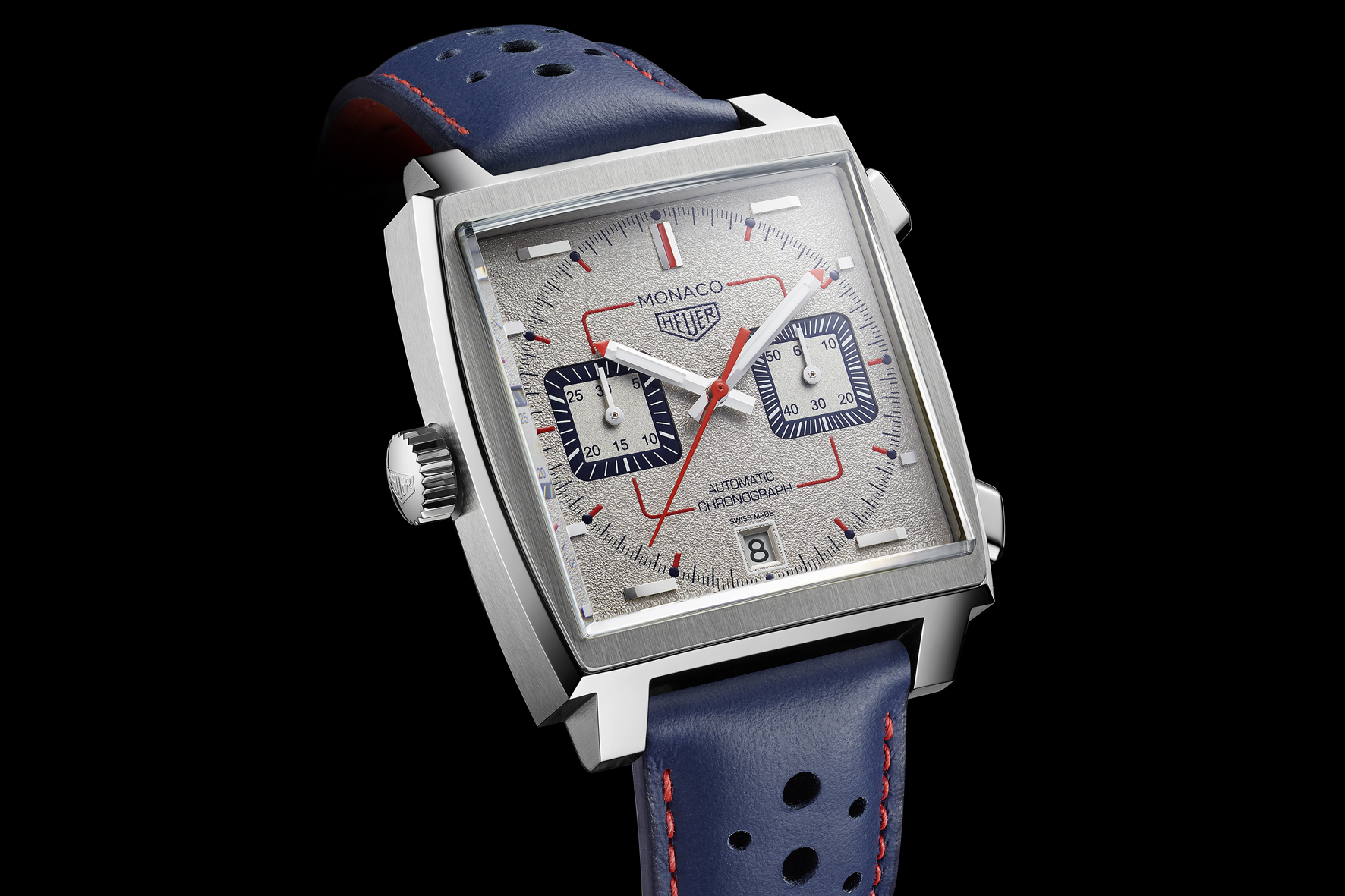 As with the original, the pushers are on the right of the case while the crown is on the left – an unconventional feature that has distinguished the Monaco over the past 50 years.

The caseback of this 1990s inspired wristwatch is engraved with the “Monaco Heuer” logo as well as “1989-1999 Special Edition” and “One of 169”. Sporting a design inspired by the original model, the stainless-steel caseback has vertical and circular brushed patterns and features a polished, vertical and circular brushed finishing. The case houses the renowned Calibre 11, a modern version of the automatic-winding chronograph movement that made its debut inside the original Monaco in 1969. 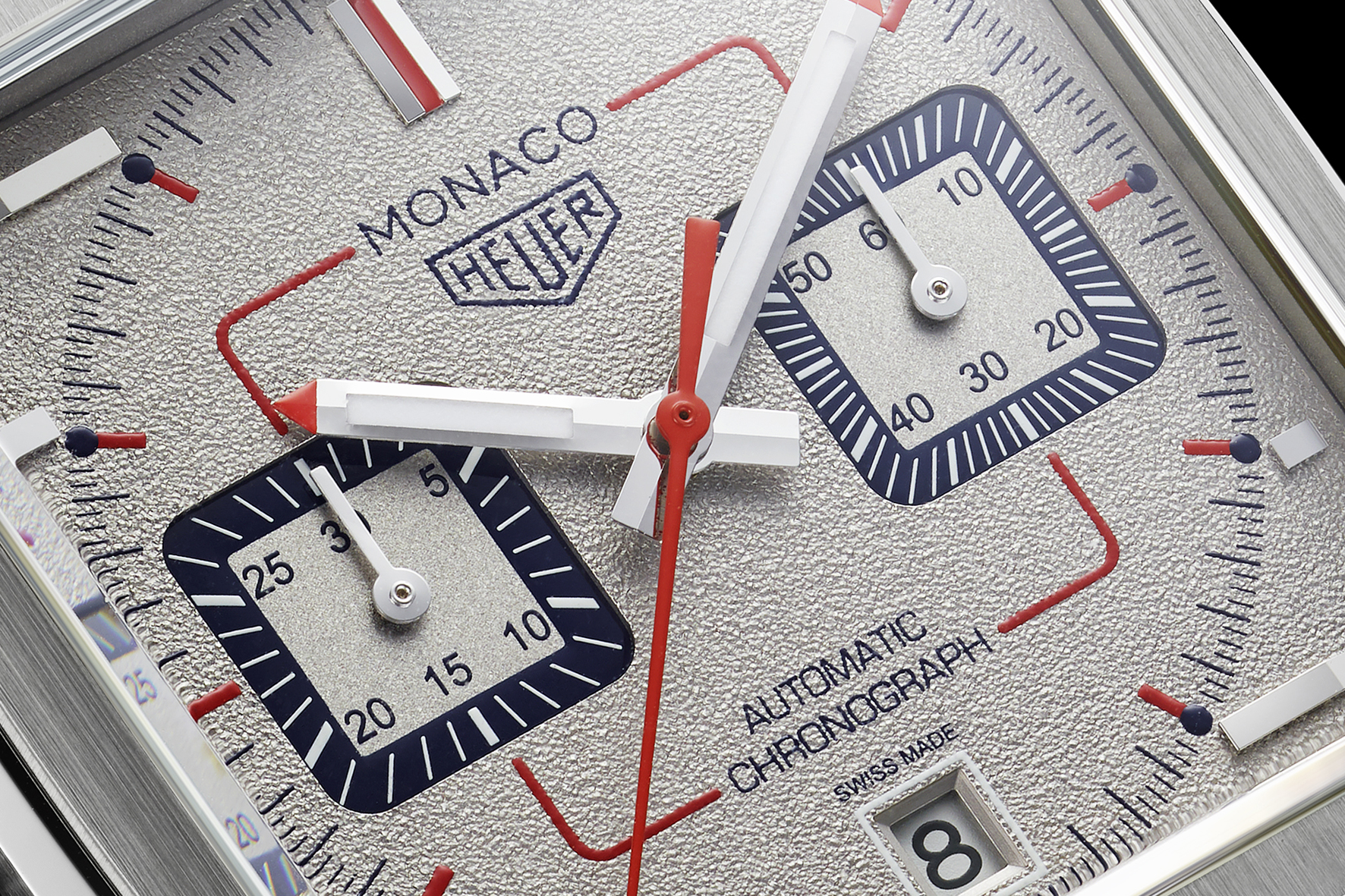 Like the watch itself, the watch box is also inspired by the original. Each of the special-edition models comes in a box with colours that match the watch and the decade it represents. The 1990s-inspired model is packaged in a dark blue box decorated with the Heuer logo and a horizontal check-pattern stripe. The watch is placed on a red cushion and surrounded by a grey interior – the same colours found on the dial. (Price €.5.950)