Chronométrie Ferdinand Berthoud unveils its new Chronomètre FB 1.3, coming on the heels of the FB 1.1 in white gold chronometer that won the “Aiguille d’or” Grand Prix awards at the 2016 Grand Prix d0Horlogerie de Geneva, and the FB 1.2 in rose gold.

The timepiece, a tourbillon and constant force chronometer, is inspired by the work of Ferdinand Berthoud, a native of the Val-de-Travers, master horologist who was appointed clockmaker to the French King and the French Navy, but also inventor and talented author. Its Maison was brought back to life by Karl-Friedrich Scheufele – also head of Chopard. 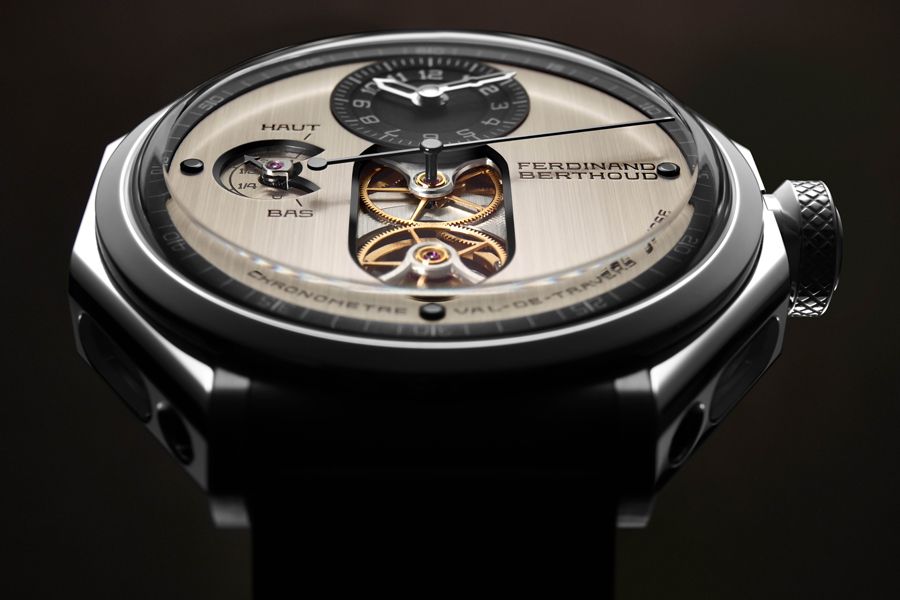 The 44 mm-diameter case of this watch is composed of a 950 platinum cylinder housing the movement, it comprises two octagonal-shaped side pieces in polished platinum. The latter is inspired by an overhead view of a marine chronometer fitted inside its case.

The grey ceramic lugs are secured to the case middle by two titanium bolts marking the starting points of the alligator leather strap. The same ceramic is also present on the medallion adorning the knurled platinum crown. Finally, four ‘portholes’ cut out from the sides of the case allow light to flood through the movement.

The dial is in satin-brushed nickel silver, a non-treated German silver: a copper, zinc and nickel alloy that is particularly brilliant when polished, yet also extremely fragile. Any imperfection is irreparable and the part must be discarded. Nickel silver is also distinguished by its warm grey colour. 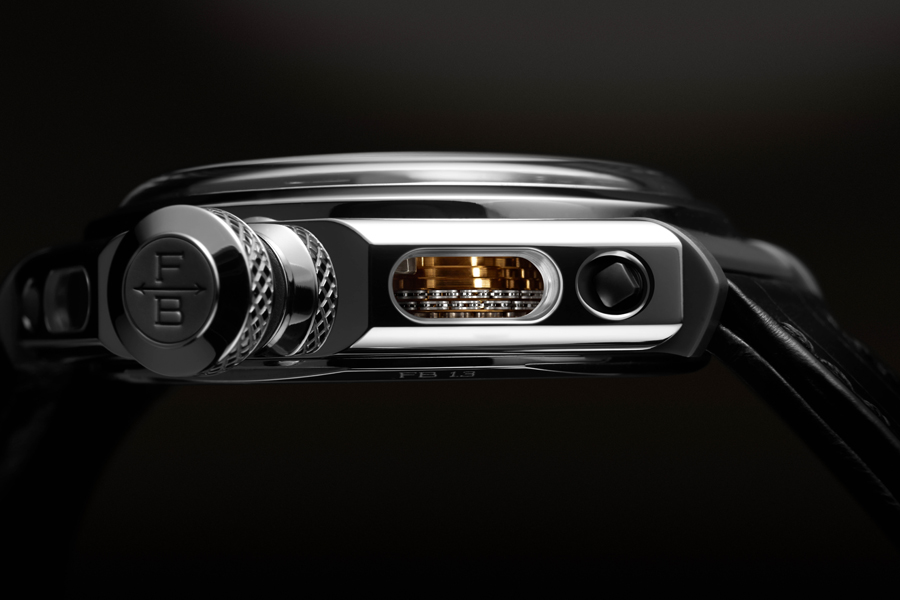 Another opening in the dial reveals the wheel driving the tourbillon carriage and the seconds wheel to which the central seconds hand is fitted, an unusual feature on a tourbillon. This slim black hand, in bronze, sweeps around a translucent sapphire railtrack circle around the rim of the dial. The hours and minutes are offset at 12 o’clock and indicated by white gold cut-out hands. The dial is engraved with the inscription “Chronomètre Val-de-Travers Suisse”.

The FB-T.FC caliber hand-wound movement (53 hours of power reserve), is endowed with complication inspired by the 18th century chronometers that served as reliable scientific instruments. It features 15 bridges and three half-bridges in nickel silver, framed by polished titanium pillars and it is one of the rare examples to feature a fusee-and-chain transmission, which is the oldest historical solution developed to ensure constant force for the escapement. 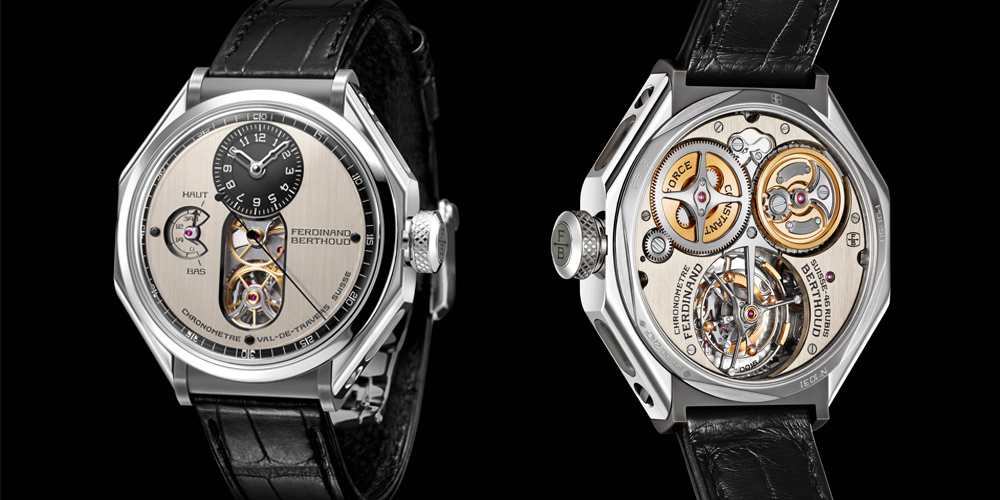 When the movement is fully wound the chain is entirely coiled around the small end of the fusee and the barrel spring is at maximum power. This force dwindles in the course of time, as the chain coils around the drum, moving from the small to the large end of the spindle-shaped fusee. The variation in the diameter of the fusee compensates for the reduction of the mainspring torque. The escapement thus receives constant energy, thereby equalling out the amplitude of the balance wheel and thereby enhancing the movement’s timekeeping precision. 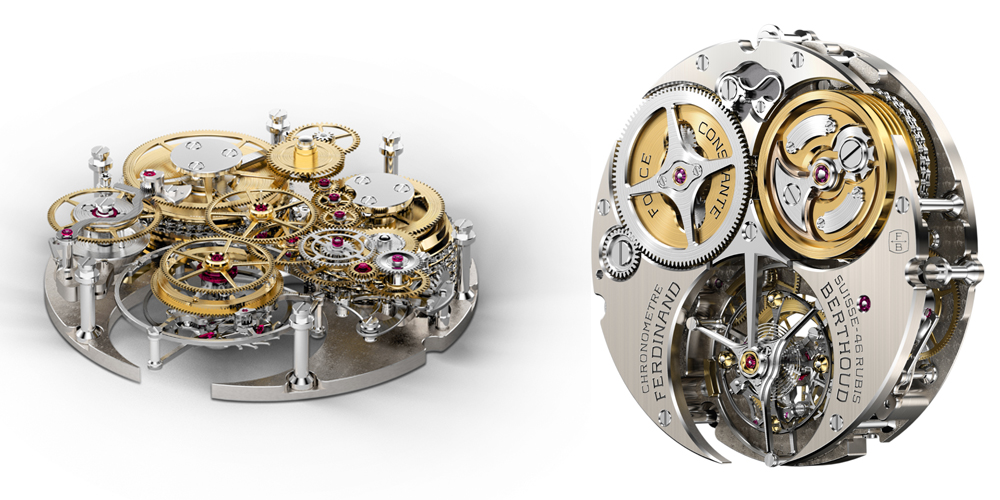 The distinctive nature of the FB-T.FC lies in the fact that its barrel and fusee are reversed, upside down, and above all suspended – meaning they are held on one side only. This helps save a few precious millimetres. At just 7.96 mm thick, the movement powering the Chronomètre Ferdinand Berthoud FB 1.3 is the thinnest in its category. A patent has been duly filed for this construction, as well as for the distinctively designed differential gear, enabling the balance-wheel to continue oscillating even during winding and thus preserving the movement’s precision timekeeping properties, and for the highly sophisticated power-reserve indication device. A truncated cone moves up and down along an arbor connected to the barrel. This suspended cone is topped by a feeler spindle in the form of a mobile arm tipped with a watch jewel. Its position on the cone reflects the state of wind. This feeler spindle is in turn connected to the hand on the power-reserve display, which features graduations engraved on the baseplate and visible through a dial opening. This daring mechanism provides a highly accurate indication of the movement’s power reserve.

The tourbillon of Calibre FB-T.FC comprises 67 components assembled within a titanium carriage, and fixed to an arrow-shaped steel arch whose tip points towards the space between the barrel and the fusee. This tourbillon contributes to earning Calibre FB-T.FC its chronometer title awarded by the Swiss Official Chronometer Testing Institute (COSC).

A great attention is given to the decoration of the components, including polishing, perlage, anglage, and to the finishing operations entirely done by hand using traditional tools.

The Chronomètre Ferdinand Berthoud 1.3 is produced in a 50 pieces limited numbered series, available only in the Maison authorized dealers. (Price €.257.000)