Speed has always been a key source of inspiration for Bell&Ross. In the last years beside excellent watches and complex mechanisms, the maison developed differents extreme machines as the B-ROCKET in 2014, a retro-futuristic concept motorcycle, streamlined like a jet plane and the AERO-GT in 2016, an avant-garde aircraft-inspired supercar, with astonishing performances.

This year, Bell&Ross has returned to its passion for engineering, creating its retro-influenced Bellytanker racecar, with missile-like aerodynamics. It is built using a fuel tank from a fighter plane. Fitted with an engine and four wheels, this tank is transformed into a streamlined racer. 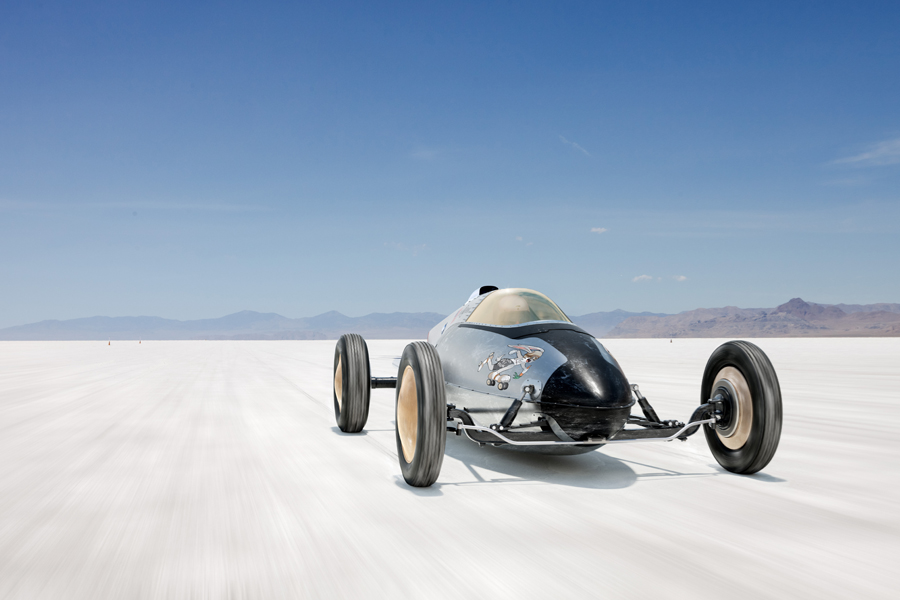 This vehicle is perfectly aligned with the spirit of the watch brand, which has aviation and the military in its DNA. It combines both aeronautical influences and numerous nods to the watchmaking world as: the metal of its bodywork is like the case of a watch, the glass covering its cockpit echoes an ultra-curved crystal, the copper-cultured trim evokes the dials of timepieces from this era and its tail fin, designed to stabilize the vehicle, is a reference to the aviation codes, as is the matte black of its “nose”. This color is used on certain stealth fighters to avoid reflections. 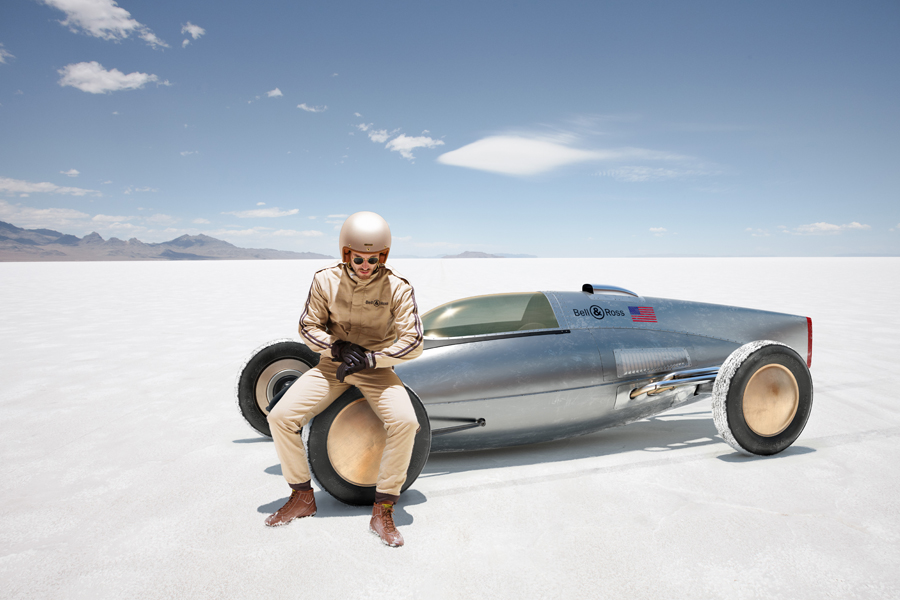 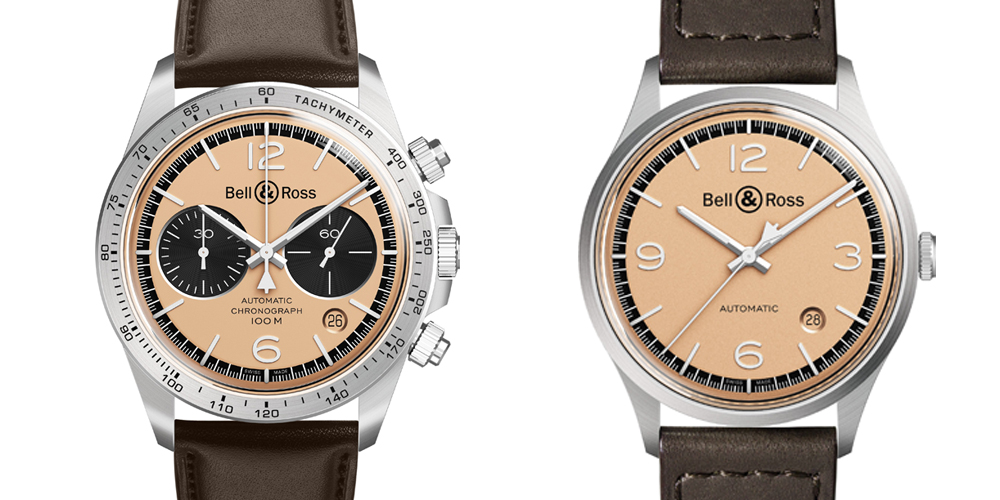 The BR V1-92 is equipped with a  Self-winding movement with three hands; it displays the hours, minutes, seconds and date.

The 38.5mm case in brushed steel harks back to the watches of the forties and fties, with a nod to the cockpit of the P-51 Mustang. The solid case back features an engraved profile of the Bellytanker. Lastly, the ultra-curved sapphire crystal, with its vintage overtones, recalls the round windows in classic plane cockpits.

The color scheme matches the Bell&Ross racer. The metallic copper of the dial echoes the color of its wheel rims. The black seen on the details of the minute track recalls the car’s nose. Finally, the steel used for the case, numerals, indices and hands pays tribute to its sculpted bodywork. The metal indices and numerals are appliques. The metal skeleton hands are filled with Superluminova, so that they remain visible at night. The aircraft-shaped counterweight on the seconds’ hand is one of the new Bell & Ross stylistic signatures. 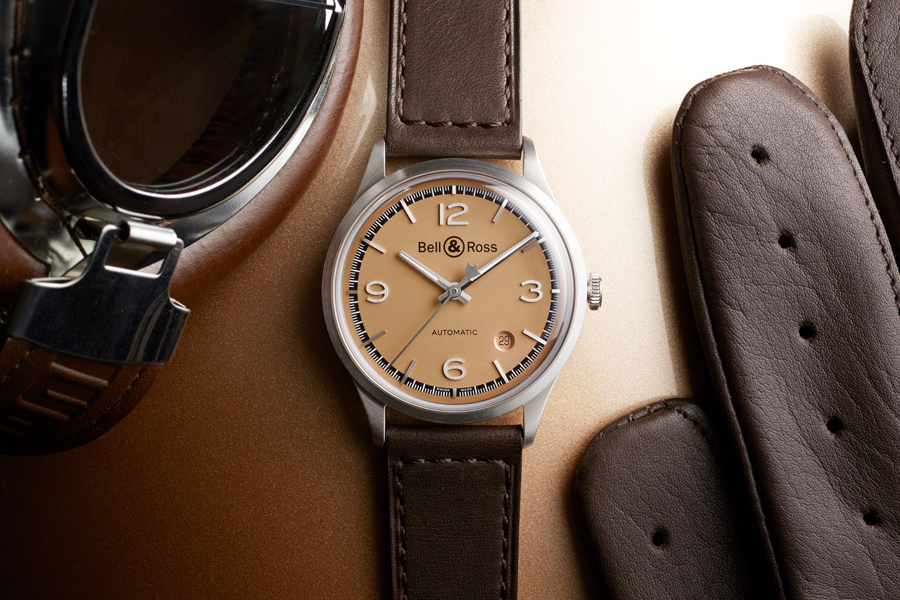 The BR V2-94 it shows up with a chronograph movement with two counters: a 30-minute counter at 9 o’clock and a central 60-second counter. The date sits between 4 and 5 o’clock.

The satin-finished polished steel of this 41mm case hints at the P-51 Mustang’s tanks. The sapphire case-back allows glimpses of the chronograph mechanism’s gear train. The crown and push buttons are screw-down for improved water-resistance. The fixed bezel features a tachymeter scale, enabling the speed of a racecar to be calculated at any time.

The dial is known as a “Panda” dial, so-called because of the contrast between the black counters and gold dial. Also in this case the color scheme used matches that of the Bellytanker. The metal indices and numerals are appliques and the metal skeleton hands are filled with Superluminova. 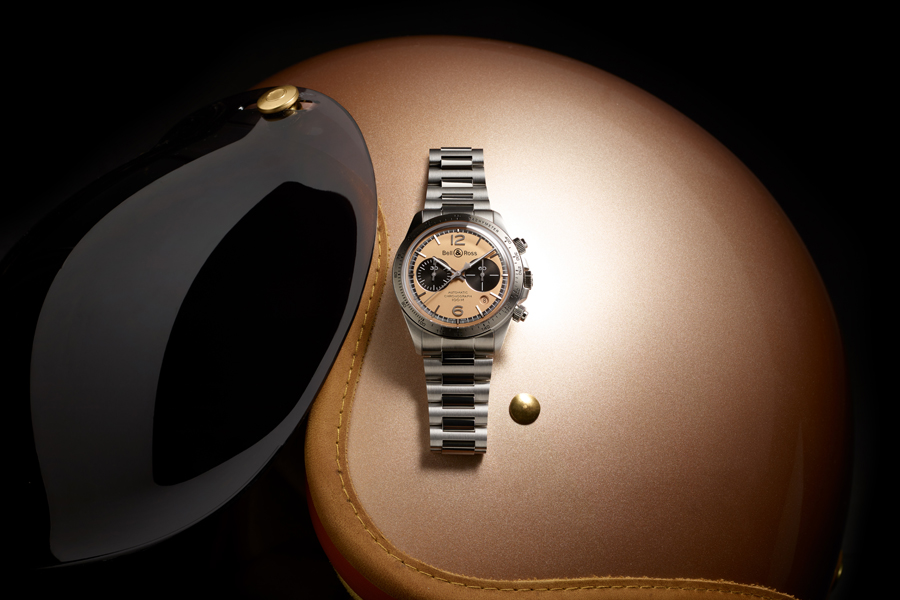