Cornes de vache 1955, American 1921 and Ultra-fine 1955. Three legendary models are now reborn arrayed in new finery within the Vacheron Constantin Historiques collection. These modern reinterpretations give new life to the iconic creations punctuating the history of the Geneva-based Manufacture.

This classic watch fitted with its distinctive ‘cow horn’ lugs is inspired by the first water-resistant chronograph designed by Vacheron Constantin in 1955. The Historiques Cornes de vache 1955 chronograph embodies a stylistic originality typical of Vacheron Constantin. On the one hand, it expresses the unconventional creativity of the Manufacture in the 1950s through its stylised lugs creating an aesthetic tension with the traditional chronograph construction with two round pushbuttons. On the other, it also conveys Vacheron Constantin’s ancestral expertise in the measurement of short times. Equipped with a column wheel shaped like a Maltese cross, Caliber 1142 powering the Historiques Cornes de vache 1955 drives the hours, minutes, small seconds and chronograph functions while ensuring a 48-hour power reserve. This entirely hand-decorated manual-winding movement is revealed through the transparent back of the 38.5 mm-diameter rose gold case that is water-resistant to 30 metres. The model’s silvered opaline dial is punctuated by applied numerals and hour-markers swept over by slender gold hands. The deep blue direct-drive seconds hand, 30-minute counter hand and tachymetric scale enhance the optimal legibility. 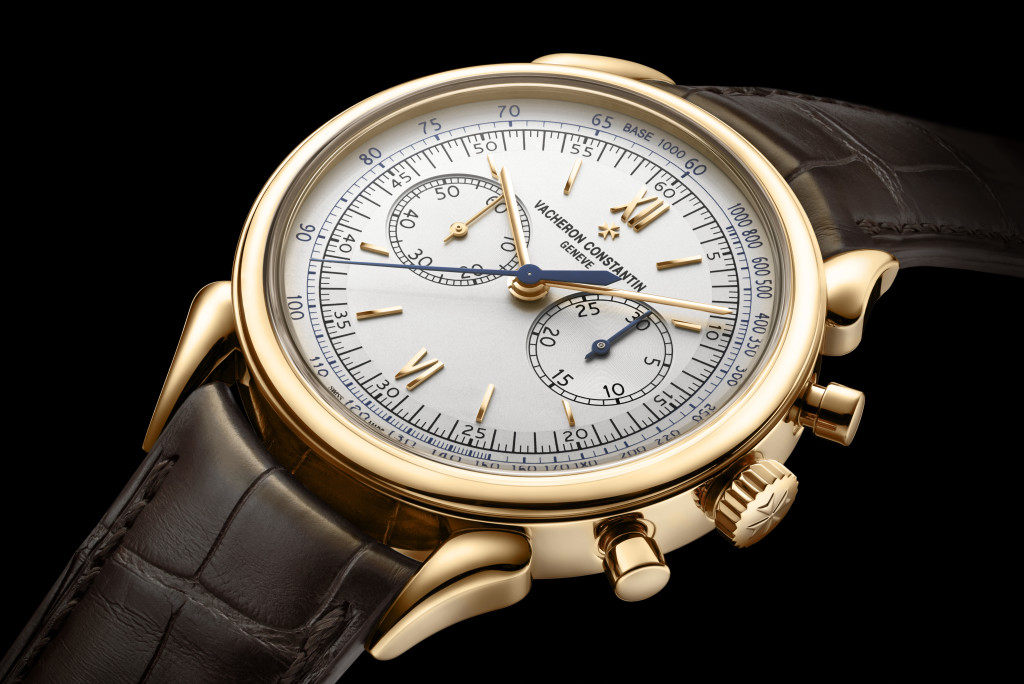 Crafted in precious platinum, the Historiques American 1921 is inspired by an original cushion-shaped model with a crown placed between 1 and 2 o’clock, created by Vacheron Constantin in the 1920s for the American market. Combining the daring style characterising the era of its birth, this contemporary reinterpretation remains loyal to the original version through an imposing cambered case diagonal time read-off, offset ball-shaped crown and small seconds between 4 and 5 o’clock. The classic yet original finely grained silvered dial bears 12 blue painted Arabic numerals and a black railway-type minute track, swept over by blued Breguet-type hands. Fitted with a lightly domed crystal, the 40 mm-diameter case water- resistant to 30 metres houses Vacheron Constantin manual-winding Caliber 4400 AS. This movement adorned with particularly finely hand-crafted finishing and endowed with a comfortable 65-hour autonomy drives hours, minutes and small seconds indications. The restrained and timeless elegance of this ‘dandy chic’ watch is complemented by a dark blue alligator leather strap fitted with a platinum buckle. 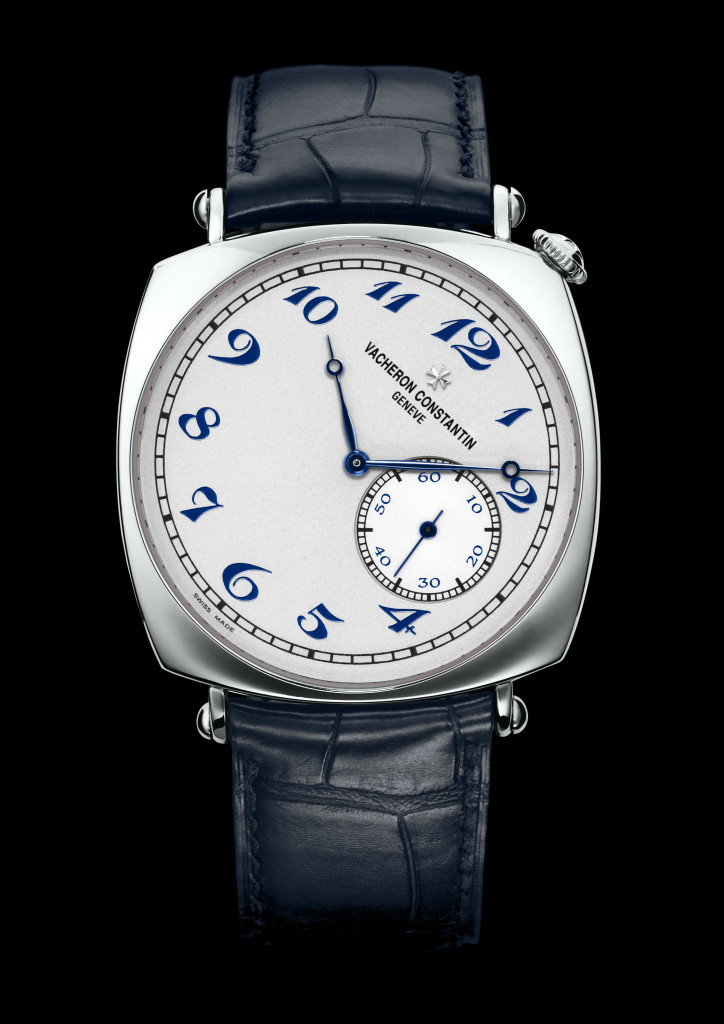 The Historiques Ultra-fine 1955 model is powered by the mechanical manual-winding Vacheron Constantin Caliber 1003, presented in 1955. In its exclusive new interpretation, this pure, restrained timepiece accommodates its legendary movement inside a round 36 mm-diameter case made of platinum. A micromechanical masterpiece comprising 117 components and yet measuring a mere 1.64 mm thick, it reveals its 18K gold bridges and plate adorned with exceptional hand-crafted finishes through the sapphire crystal back of the case that is water- resistant to 30 metres. This classic watch with its 31-hour autonomy is one of the thinnest in the world, at just 4.13 mm thick. Its hours and minutes functions are displayed on a silvered opaline dial featuring a pure, minimalist style and bearing gold baton-type hands and painted blue hour- markers matching the dark shade of the strap with its platinum buckle. 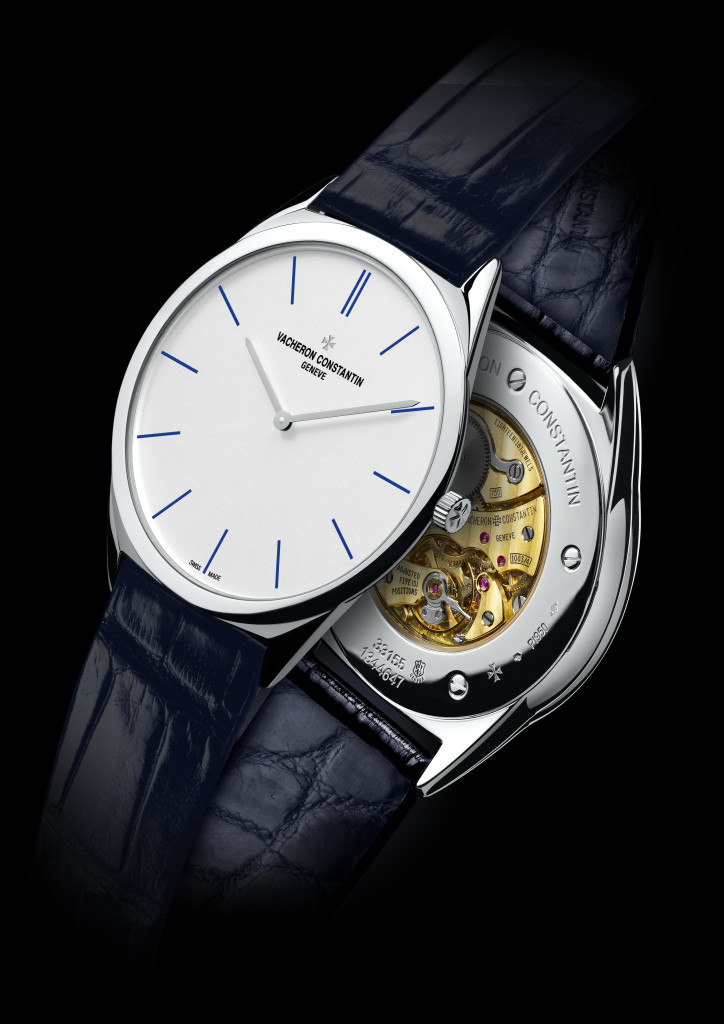