Ulysse Nardin and Devialet, the French company that revolutionized high definition audio, combining the strengths of their two Research and Development departments, realized the new Hourstriker Phantom, a limited edition of 85 striking watches. 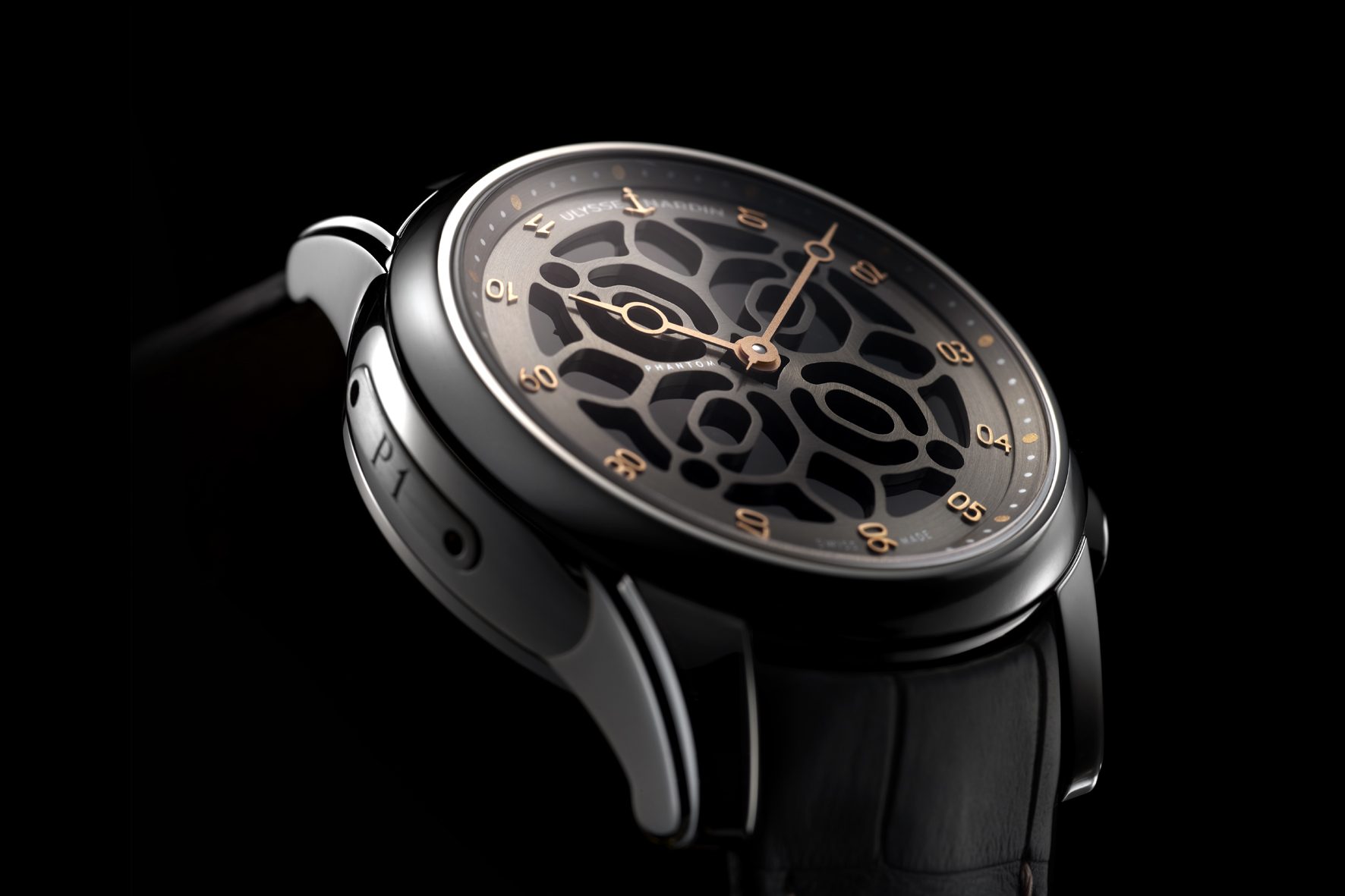 “Our main goal was to create a high-performance striking watch” explains Patrick Pruniaux, CEO of Ulysse Nardin. “Moreover, it was fate: Emmanuel Nardin, one of Devialet’s founders who co-developed the Hourstriker Phantom model is in fact a descendant of the Ulysse Nardin family. You simply couldn’t make it up. “

Devialet offers some of the most advanced “made in France” sound systems in the world, for those music fans in search of the perfect listening experience, thanks to Devialet’s more than 160 patented technologies. Their flagship product, The Phantom, a new generation of high-definition connected speakers, is capable of creating sound up to 108 dB SPL. Phantom now puts its name to Ulysse Nardin’s new striking mechanism. 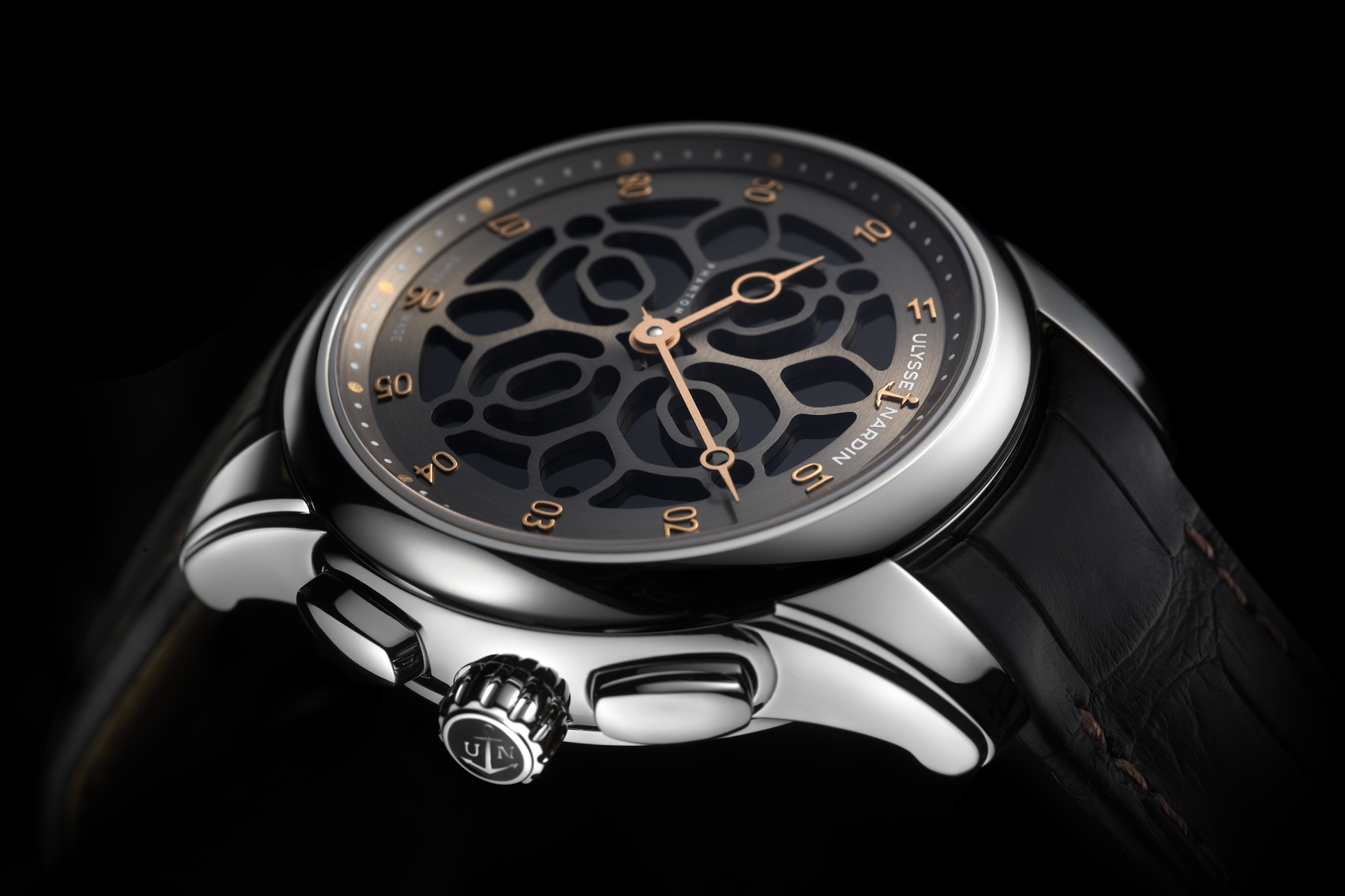 Before there was electric lighting, striking watches were originally conceived with the aim to ring on the hour in the dark and are the embodiment of a genuine dream. Since the 1980s, under the impetus of Rolf Schnyder, Ulysse Nardin is one of the first watchmakers to bring these timekeepers back to life.

Hand in hand, Devialet engineers, experts in distortion phenomena, collaborated with Ulysse Nardin’s watchmakers specialized in sound to redefine each step in the audio signal chain sent from Ulysse Nardin’s striking mechanisms to deliver the best performance ever recorded on a striking watch, 85 dB to 100mm. 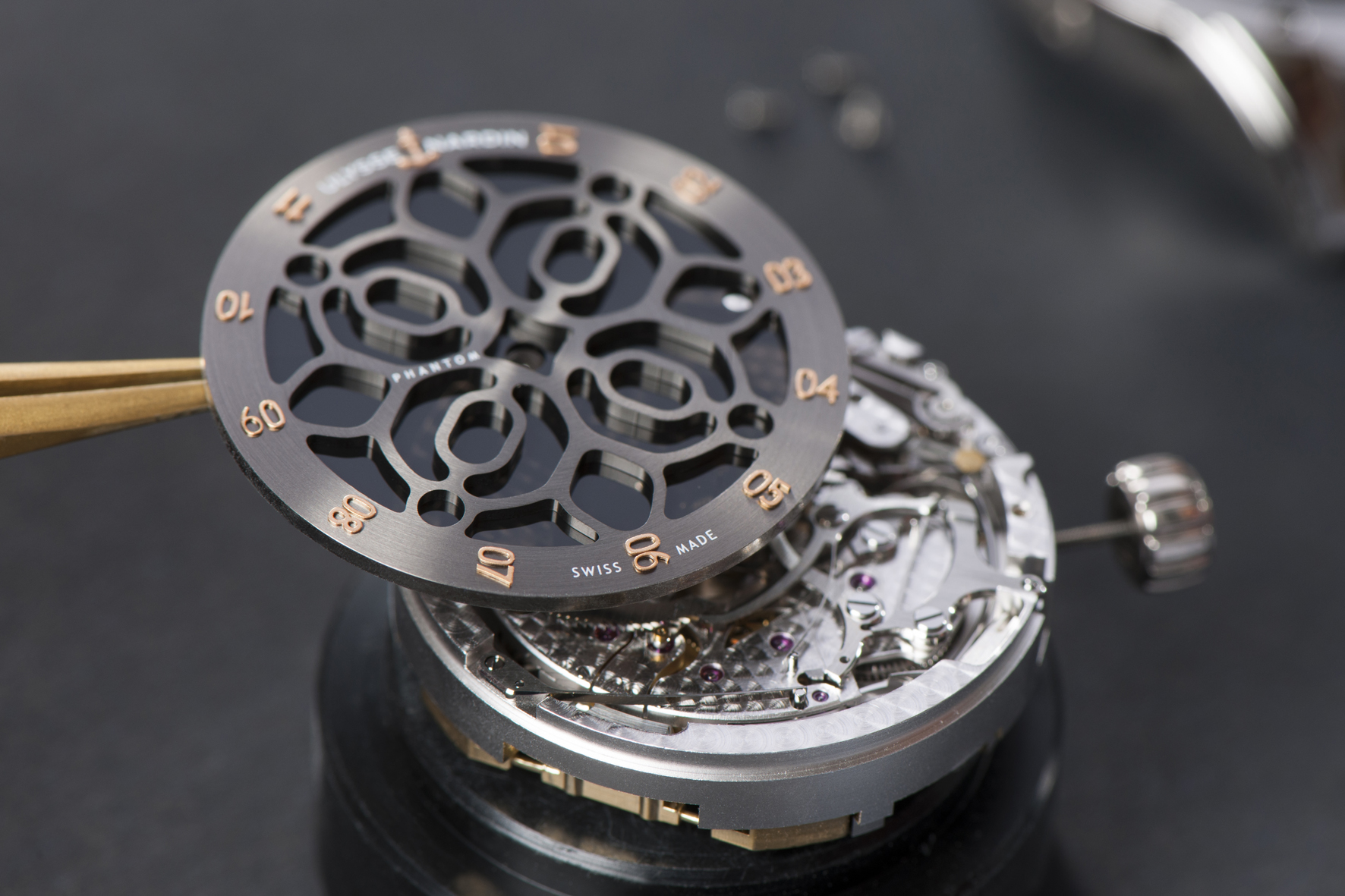 With a classic striking mechanism, a hammer hits a timbre generating sound frequencies, when emitted, tells the time on command. However, in the Hourstriker Phantom, the heel of the timbre is fixed by a system of torsion arms that change the direction of the action forces induced by the timbre’s vibrations. In a classic system, the forces produced are essentially in the watch’s movement, which generates a small amount of air that is then displaced by the various components of the watch.

With the Hourstriker Phantom, the action forces created by the timbre thus find their way outside of the watch itself. These forces are vigorously transferred using a transmission arm to a thin membrane, which is found on the bottom side of the watch. As the membrane has a large surface area, a large amount of air is displaced, which results in a high sound level. One could compare this to a loudspeaker and its cone and membrane. 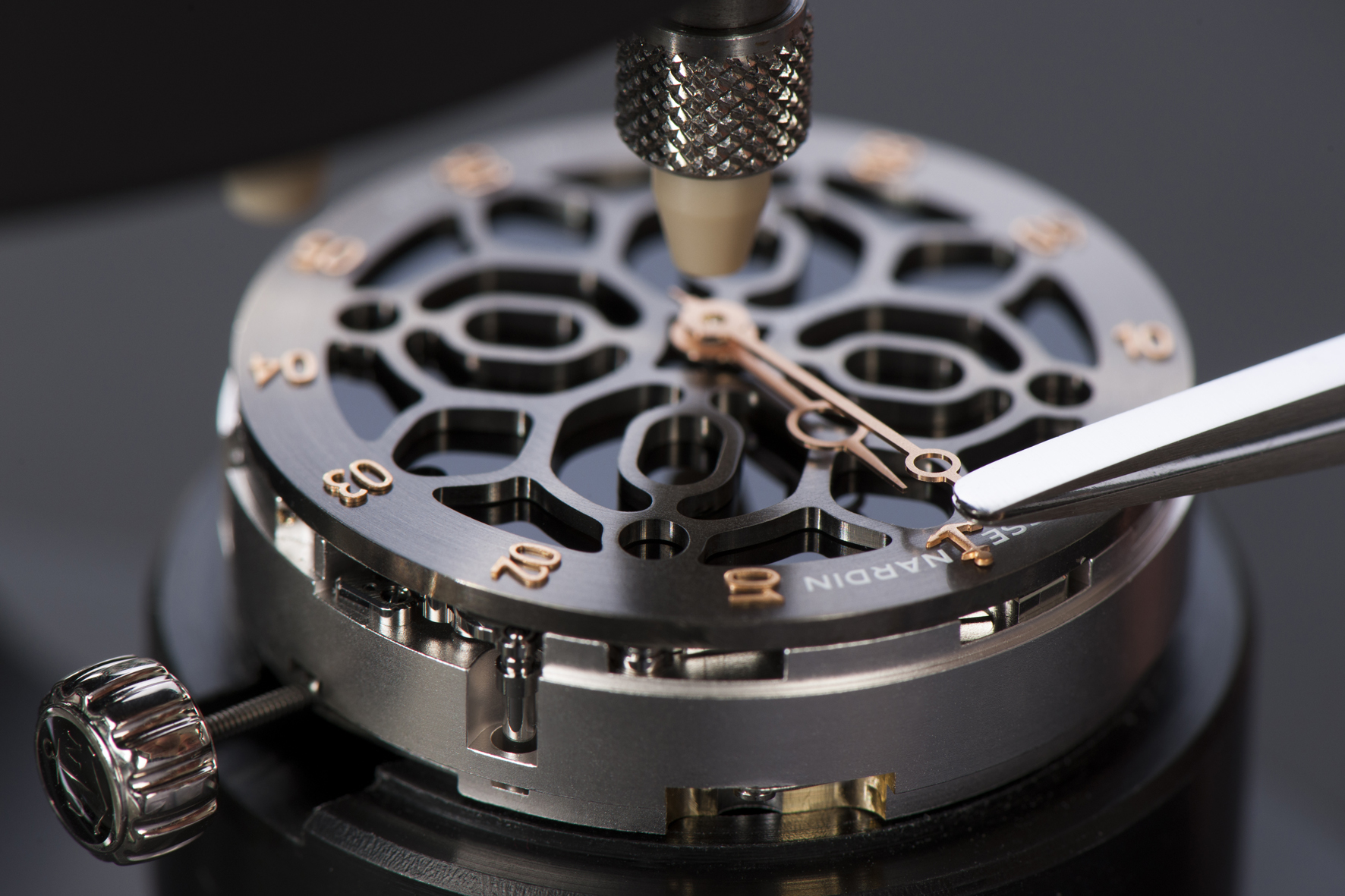 The bottom side of the watch is perforated with eight openings under its membrane that allows the sound to travel and contains the UN-610 automatic manufacture movement. The result is stunning and all the sonic potential of this timepiece appears to be released, amplified, and enhanced. Its fully polished 43 mm titanium case also amplifies the sound and extends its resonance to 85 decibels, an unrivaled level of sound in the world of watchmaking. 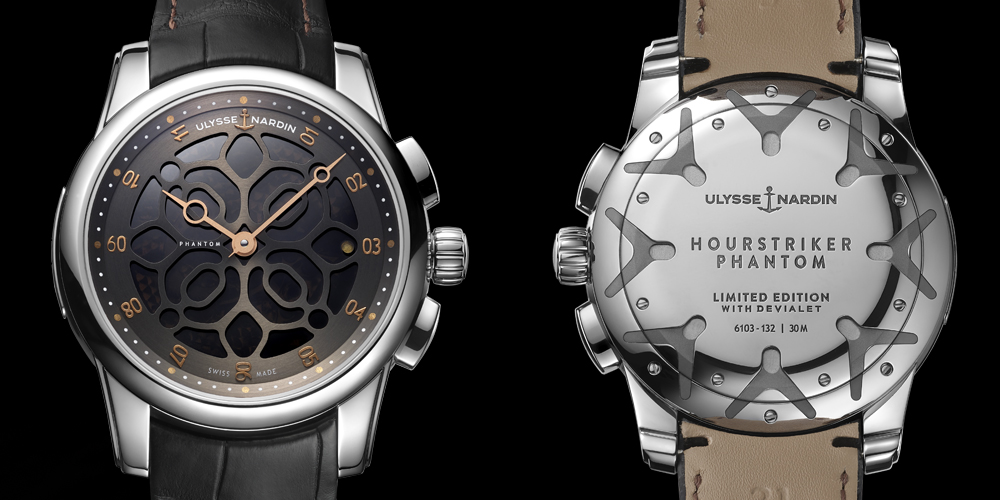 “This new Hourstriker Phantom is the very essence of Devialet expertise expressed through a timepiece: a refined object with an optimized compactness/performance ratio and unbridled power. If Devialet products are looking to give the listener the impression that the artist is right in front of them, then this new Ulysse Nardin striking watch gives the sensation of a real musical instrument”, concludes Patrick Pruniaux. 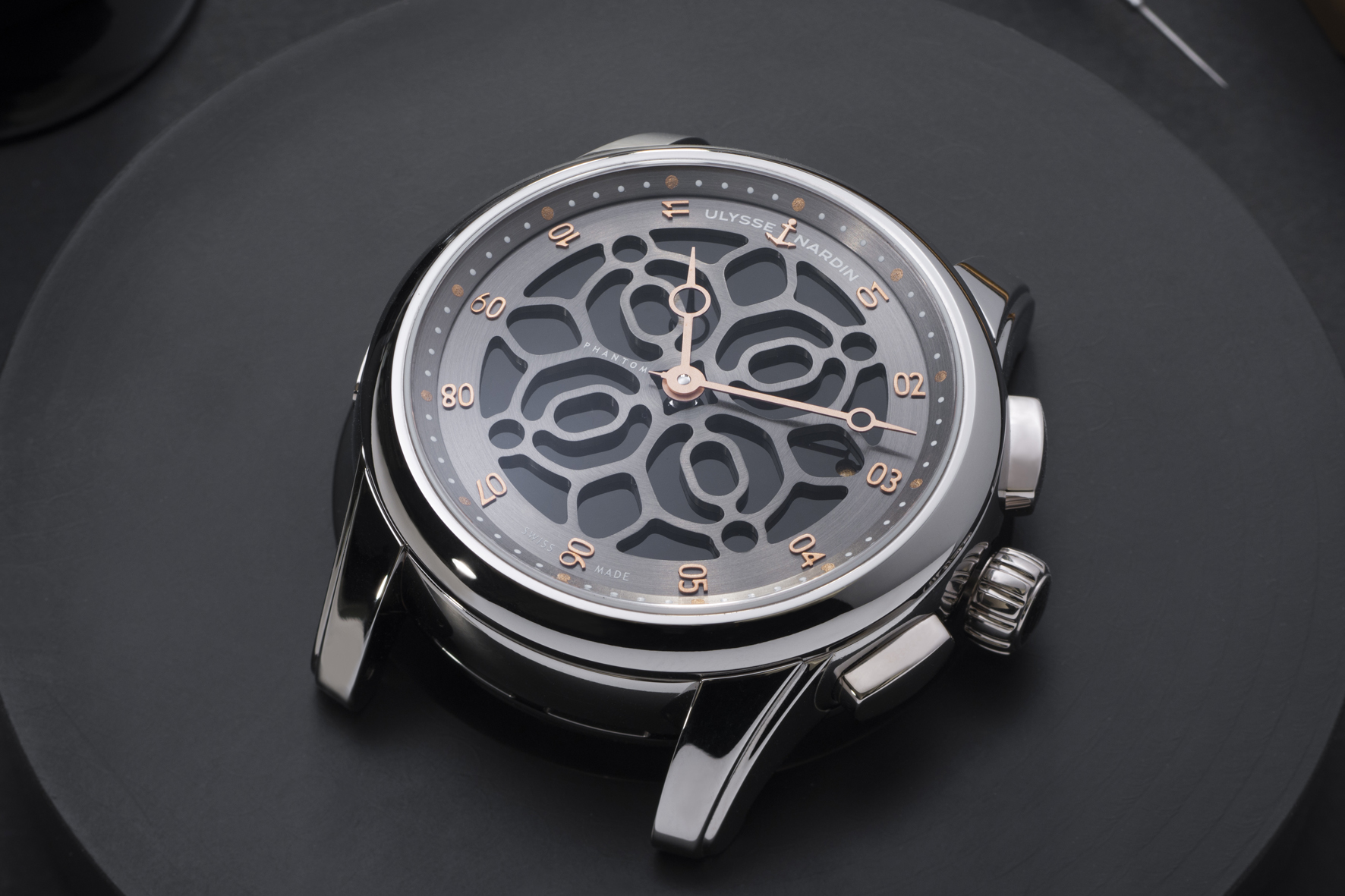 The watch’s face is adorned with a satin-brushed anthracite dial inspired by Chladni’s figures, formed by the materialization of vibratory waves, a nod to the Devialet Phantom’s protective net placed over the tweeter. Hidden under this sculpted lace-like net, tinted glass obscures the watch’s movement. A small, but original feature, the “rose gold” colored hands point towards the Arabic numeral indexes, all tilted outwards, in single file and in a clockwise direction, just like a navy compass. At three o’clock, a small “rose gold” chip disappears and reappears depending on whether you want to activate or deactivate the striking mechanism (ON/OFF button). At CHF 72,500, the Hourstriker Phantom has become the most affordable striking watch on the market. The piece is enhanced by a black alligator strap and will be sold as a limited edition of 85 pieces, evoking the 85 decibels that it majestically reaches.