The RM 50-03 tourbillon split seconds chronograph ultralight McLaren F1 weighs less than 40 grams which makes it the lightest mechanical chronograph ever made. This landmark has been achieved through the use of cutting-edge technical materials. The design not only incorporates Titanium and Carbon TPTTM, but also introduces an entirely new material into the world of watchmaking: Graph TPTTM, more commonly known as graphene. 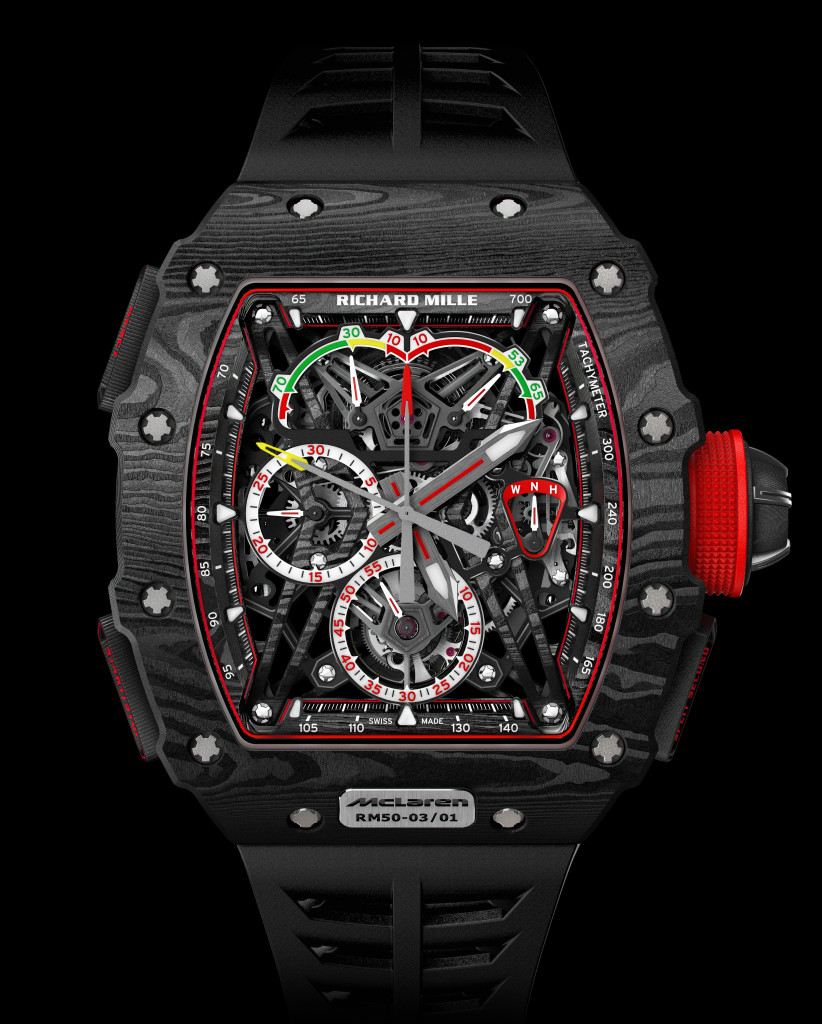 These new applications for the material emerged through research at the National Graphene Institute, established in 2015 at The University of Manchester. Thanks to the collaborative work between The University of Manchester, McLaren Applied Technologies and North Thin Ply Technology (NTPT®), Richard Mille has succeeded in producing a watch case machined in an improved form of Carbon TPTTM. The carbon’s physical properties were signi cantly enhanced by the introduction of graphene, a revolutionary nano-material which is six times lighter than steel, and 200 times stronger. McLaren Technology Group and McLaren-Honda, which are currently working on integrating graphene into their Grand Prix cars, made it possible to consider this material as a means to signi cantly low the density of our carbon composite while increasing its resistance.

For its part, the 7-gram movement completely deserves the qualifier ‘ultralight’. The secret to its feather weight lies in the use of grade 5 Titanium and Carbon TPTTM for the baseplate and bridges, and in the extreme skeletonisation of components. Likewise, the density, stiffness and low thermal conductivity of Titanium make it a material of choice in McLaren Racing’s Formula 1 engineering build programme, where it’s not only used to lighten and reinforce chassis and aerodynamic elements, but also to produce gearboxes, connecting rods and valve systems. 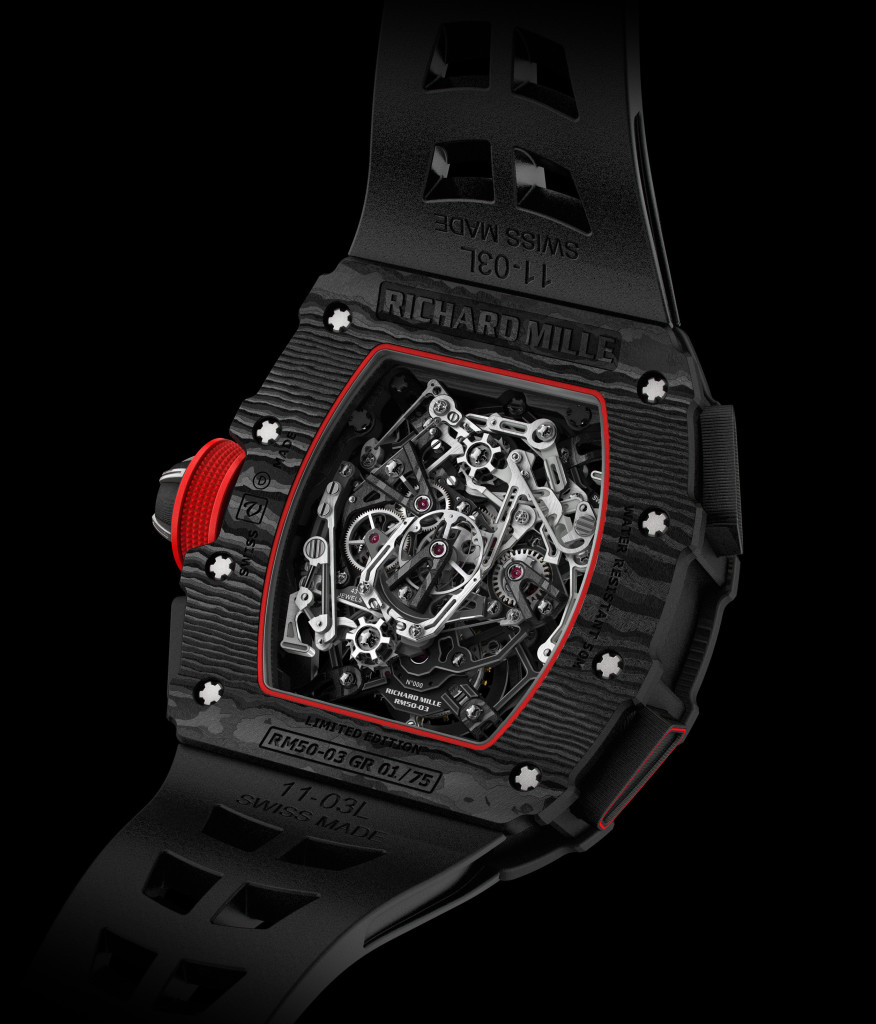 A transverse cage, crafted of Carbon TPTTM and inspired by the wishbone suspension structure of a McLaren-Honda Formula 1 car, is a fixed to the caseband, and supports the entire RM50-03 calibre. By eliminating the casing ring, this unusual architecture enables a perfect fit between the movement and case. Taken together, these technical solutions provide the complex calibre with tremendous resistance properties. Indeed, the casing has withstood shock loadings of 5,000g in the RM workshops.

The RM 50-03 McLaren F1 is chronographic perfection brought to life: it combines a tourbillon escapement with a split-seconds function. In order to perform without fail, the combination of these two complications within a single mechanism demands perfect transfers of energy. The ensuing need to reduce friction led to research on how to improve the profiling of the teeth on the barrel and gear train. The result is superbly balanced torque and optimised yield.

The movement’s performance and the quality of the energy delivered can be easily read via coloured indicators denoting the 70-hour energy reserve and torque sensor. The hollow pushers of the chronograph are representative of the air intake ducts on the McLaren-Honda car, while the shape of the crown takes its cue from the racing competition wheel rims used by the British team. 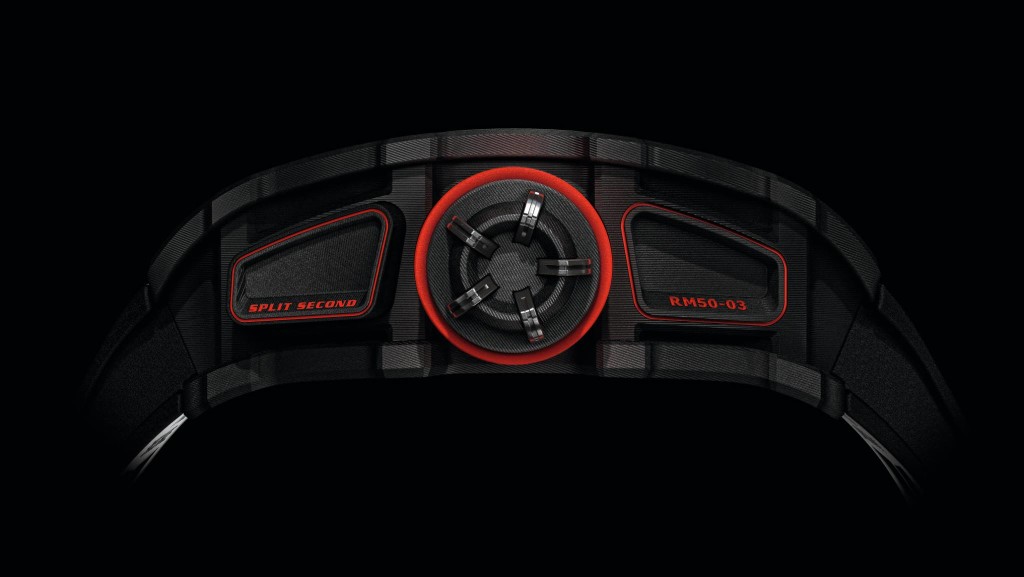 Design of a new split-seconds mechanism and extensive research on the work of the split-seconds clamps have permitted a 50% reduction in the chronograph’s energy consumption, while at the same time reducing arbor friction. The 6-column wheel that controls the various rockers for the split-seconds function was designed to guarantee flawlessly simultaneous movement, clean function lock, and highly stable settings.

The extraordinary properties of graphene encouraged RM to pursue additional developments in conjunction with the strap supplier, BIWI S.A., and to incorporate this nano-material into the rubber strap of the RM 50-03 to increase its elasticity and resistance to wear. These various applications of graphene represent significant technical advances that are of capital importance for both Richard Mille and McLaren-Honda.

The RM 50-03 McLaren F1 will be produced in a numbered limited edition of 75 pieces and will be available only at Richard Mille boutiques. Each watch will be accompanied by a 1:5 scale model of the McLaren-Honda racing car driven in 2017 by Double-World Champion Fernando Alonso and Stoffel Vandoorne. (Price €.1.112.000) 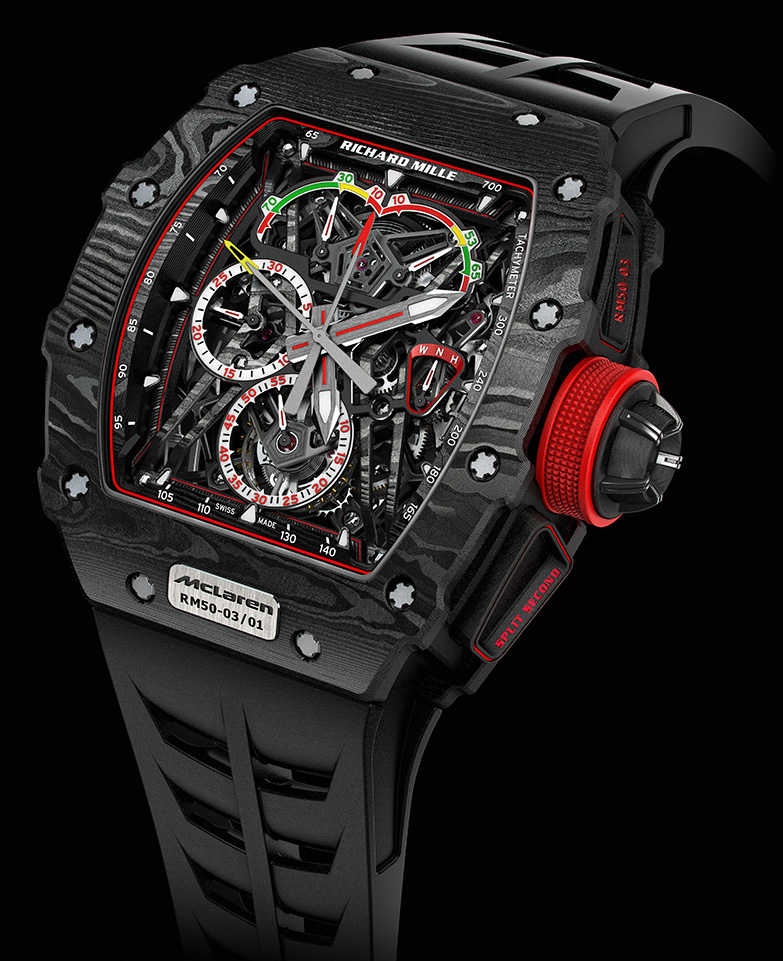 Richard Mille: RM 47 Tourbillon “The Time OF The Samurai”