Fifty fascinating vintage cars running along a 550 km route passing through the evocative and snowy landscapes of the Dolomites; that was the programme of the seventh edition of the WinteRace, the most highly anticipated regularity race of the winter. The timekeeper for the “Superclassica ACISPORT” organised by Alte Sfere was Girard-Perregaux, watch sponsor of the event. The brand didn’t only offer a Laureato 42mm as a prize, but also chose this occasion to introduce its new, exceptional timepiece: “Quasar”.

The 50 vintage cars (all strictly built before 1976) crossed the starting line on March 1st, ahead of about fifteen Porsches racing for victory in the 4th Porsche WinteRace – dedicated to monobrand historical built (between 1977 and 1990) and modern built (between 1991 and today) cars which took the road after the official racers. 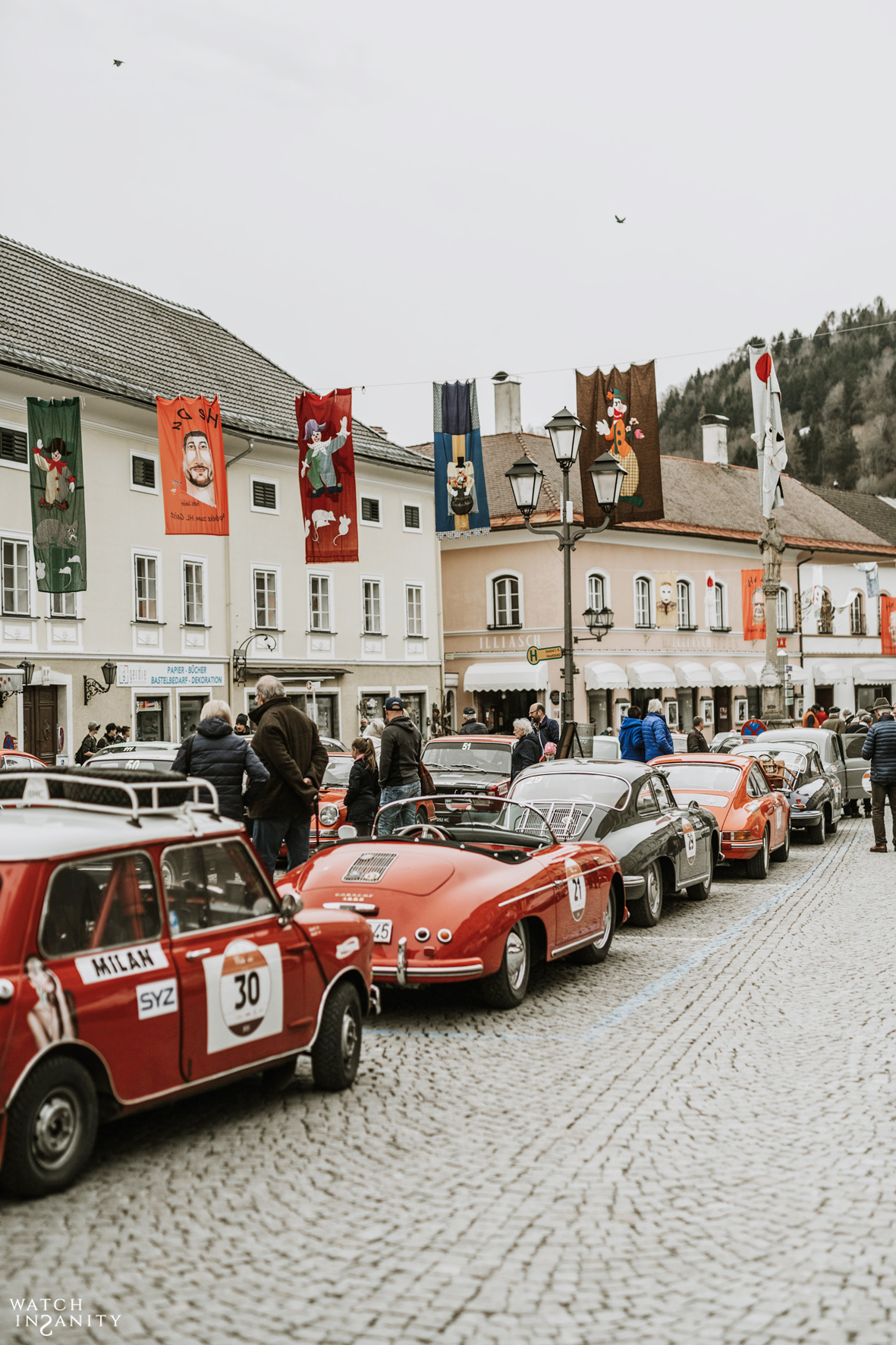 The two-day race was made of two day legs, the first running through Austria, Ősttirol and Carinthia, and the second across the Dolomites with the “Passes Tour,” going over the Giau, the Pordoi, the Sella, and the Gardena passes, and including the Furcia pass – novelty of this year. After crossing the Furcia pass, the cars headed towards Dobbiaco and the Cimabanche pass before arriving on Corso Italia in Cortina, where the cars were put on show. 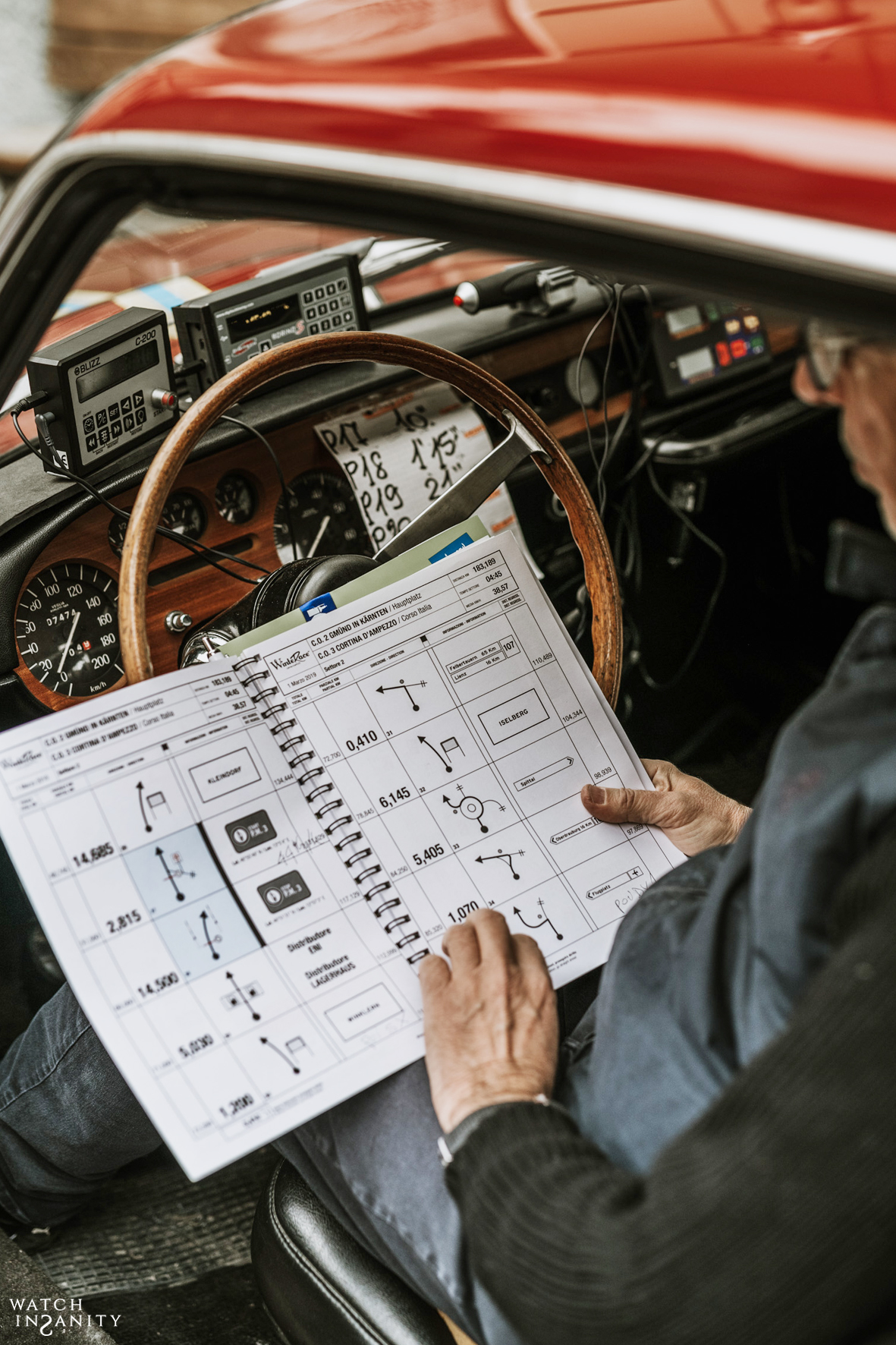 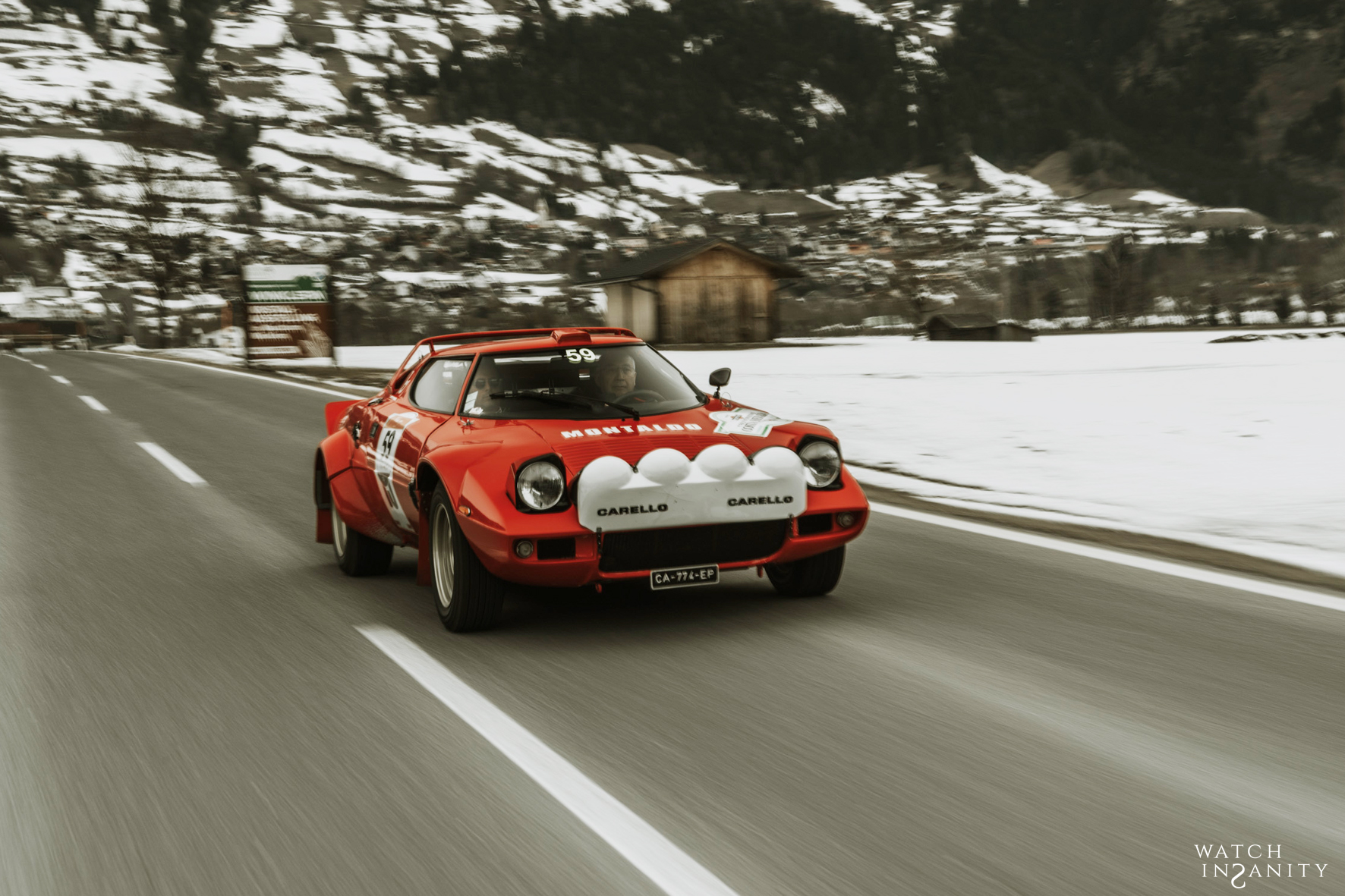 Winners of the race for the second year in a row, the Classicteam’s Sisti-Gualandi team with their fascinating 1937 Lancia Aprilia. The second place was conquered by the young “under 30” Gaggioli-Pierini team with their 1972 Autobianchi A 112 belonging to the recently created Car House Club; while the bronze medal went to the Classicteam’s Fontanella-Covelli duo with their 1939 Lancia Aprilia. Girard-Perregaux on the other hand rewarded the Sala-Sala team with their 1964 Porsche 356 C as the best father-and-son team: they won the iconic Laureato 42mm timepiece, with its exclusive strap dedicated to the WinteRace. 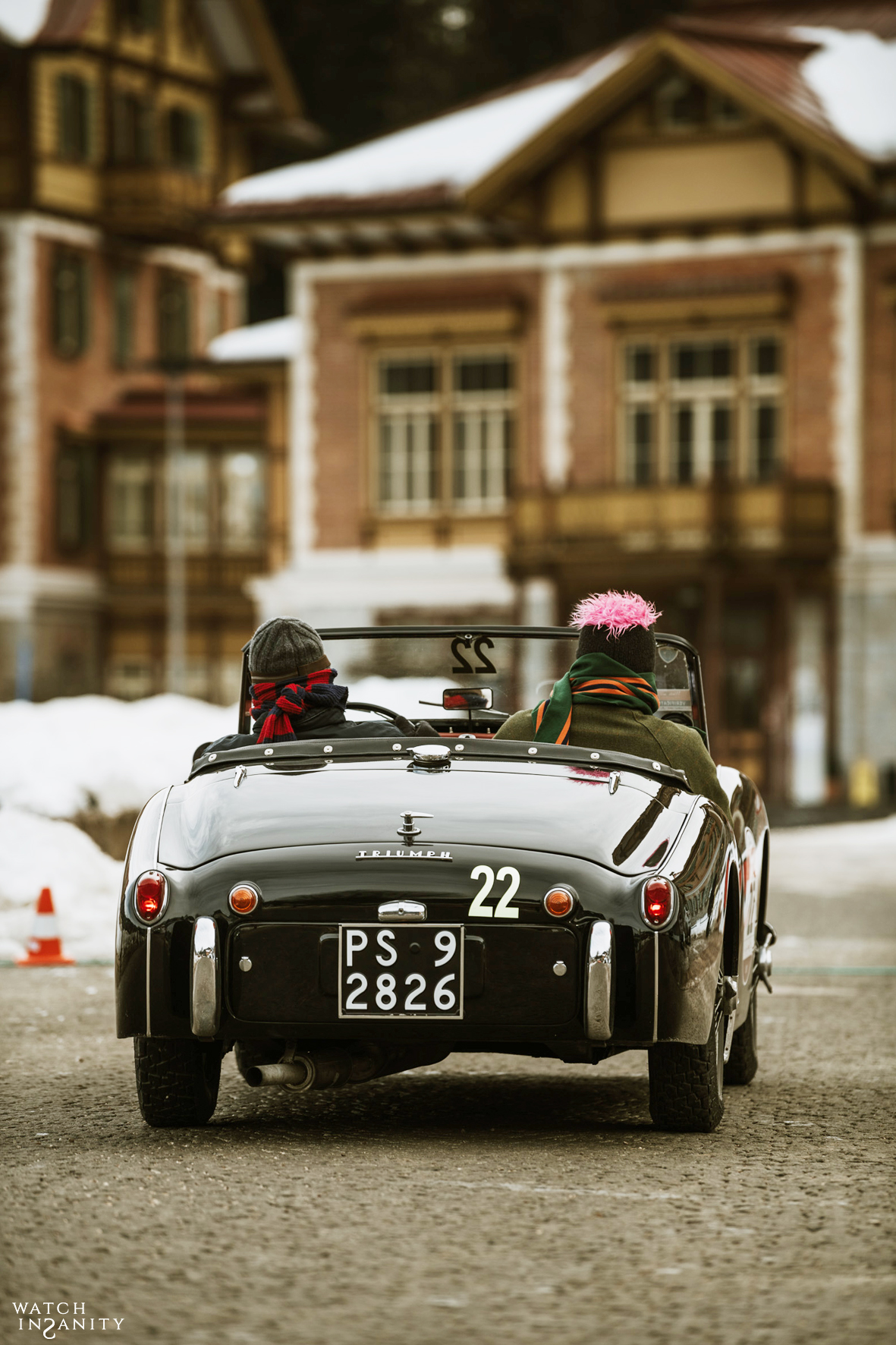 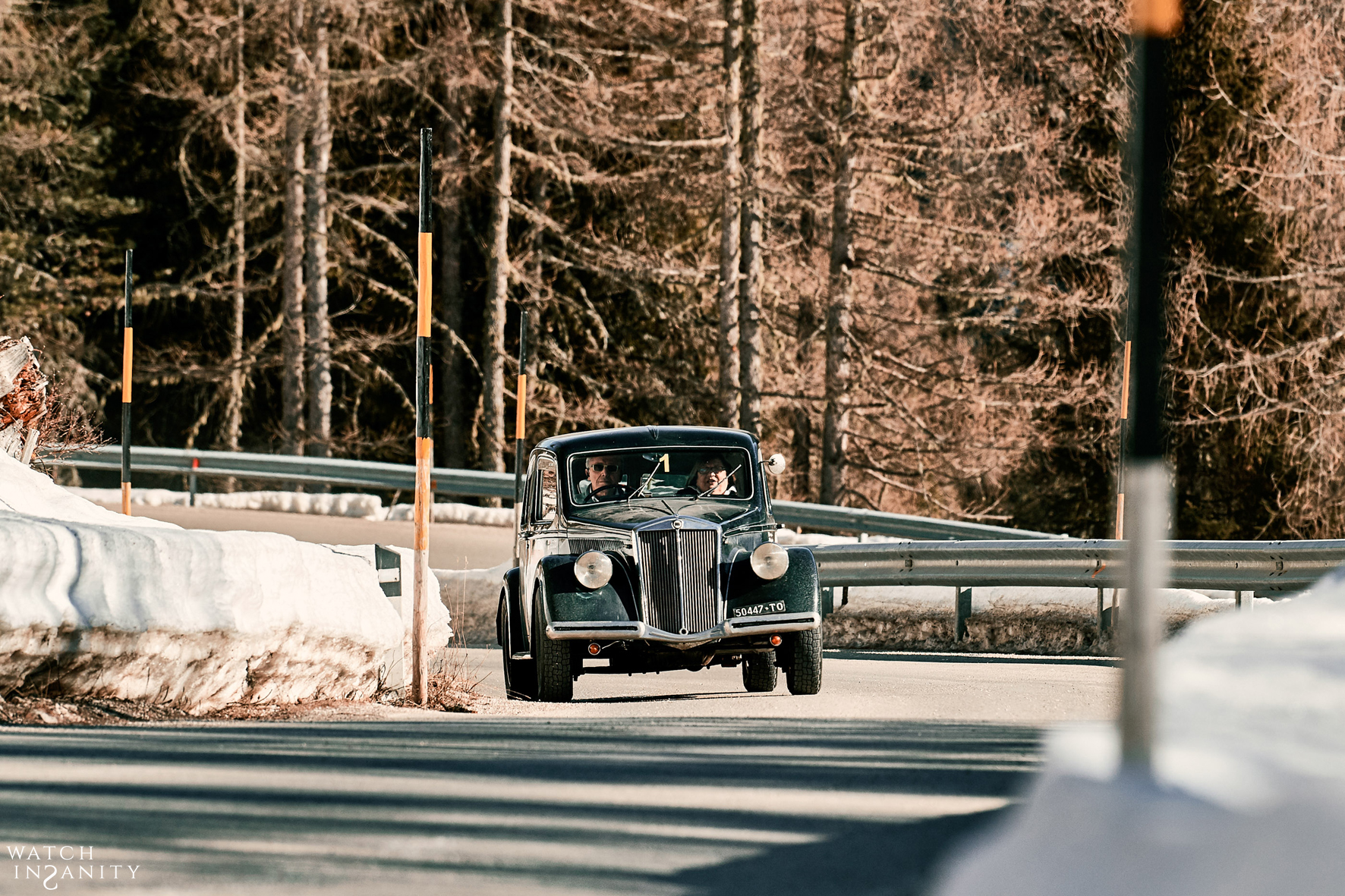 Every year the event grows bigger and attracts more participants, and among the oldest vehicles competing on the snowy roads this year there were three pre-war Lancia Aprilia, including the winning 1937 car owned by the Sisti-Gualandi team, a 1937 Fiat 508 C, a 1953 Jaguar XK120 and a 1953 Fiat 1100/103. Under the spotlight of this edition, the Tabacchi-La Russa team’s 1955 Porsche 550 Spyder RS, once the star of the Pebble Beach and Villa d’Este “Concours d’Elegance.” This vehicle is the only version in the world of the Porsche 550 Spyder to have been produced by the German car company between 1953 and 1957; it was nicknamed the “Giant Killer” for its light weight and optimal handling. The model racing in this WinteRace competed as well in the 24 Hours of Le Mans and the 6 Hours of Nürburgring. It was one of the first cars to have a spoiler mounted on the rooftop – thanks to the idea of Swiss engineer and pilot Michael May – in addition to having set a world record in Montlhéry in 1955. At the starting line the public could also admire the Lancia Stratos operated by the Swiss Mellinger-Gelmini team, and the legendary 1958 Triumph TR3 that Marcello Mastroianni rode in “La Dolce Vita,” the masterpiece film by Federico Fellini. Behind the wheel was the current owner of the vehicle, Filippo Berselli. 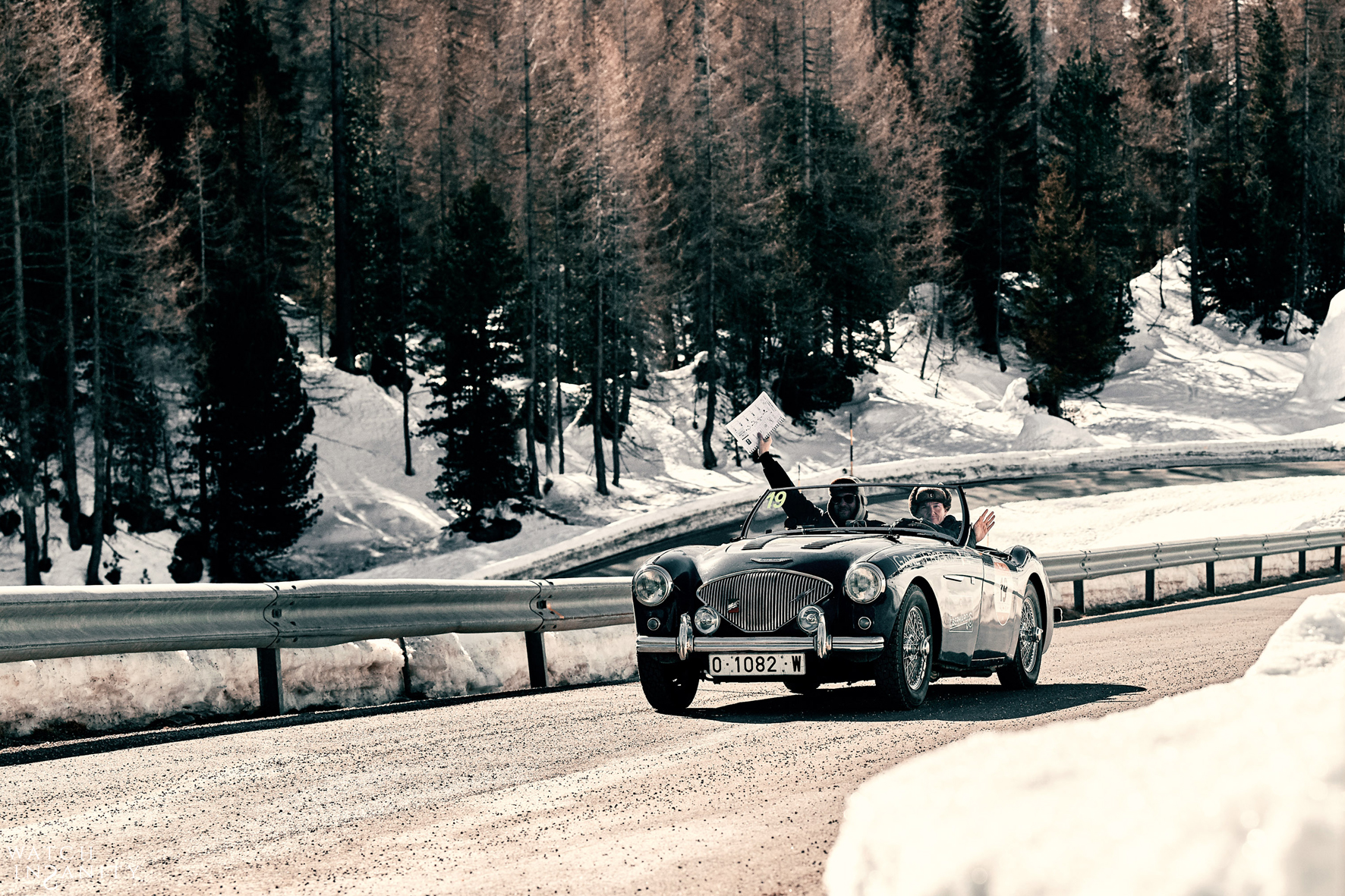 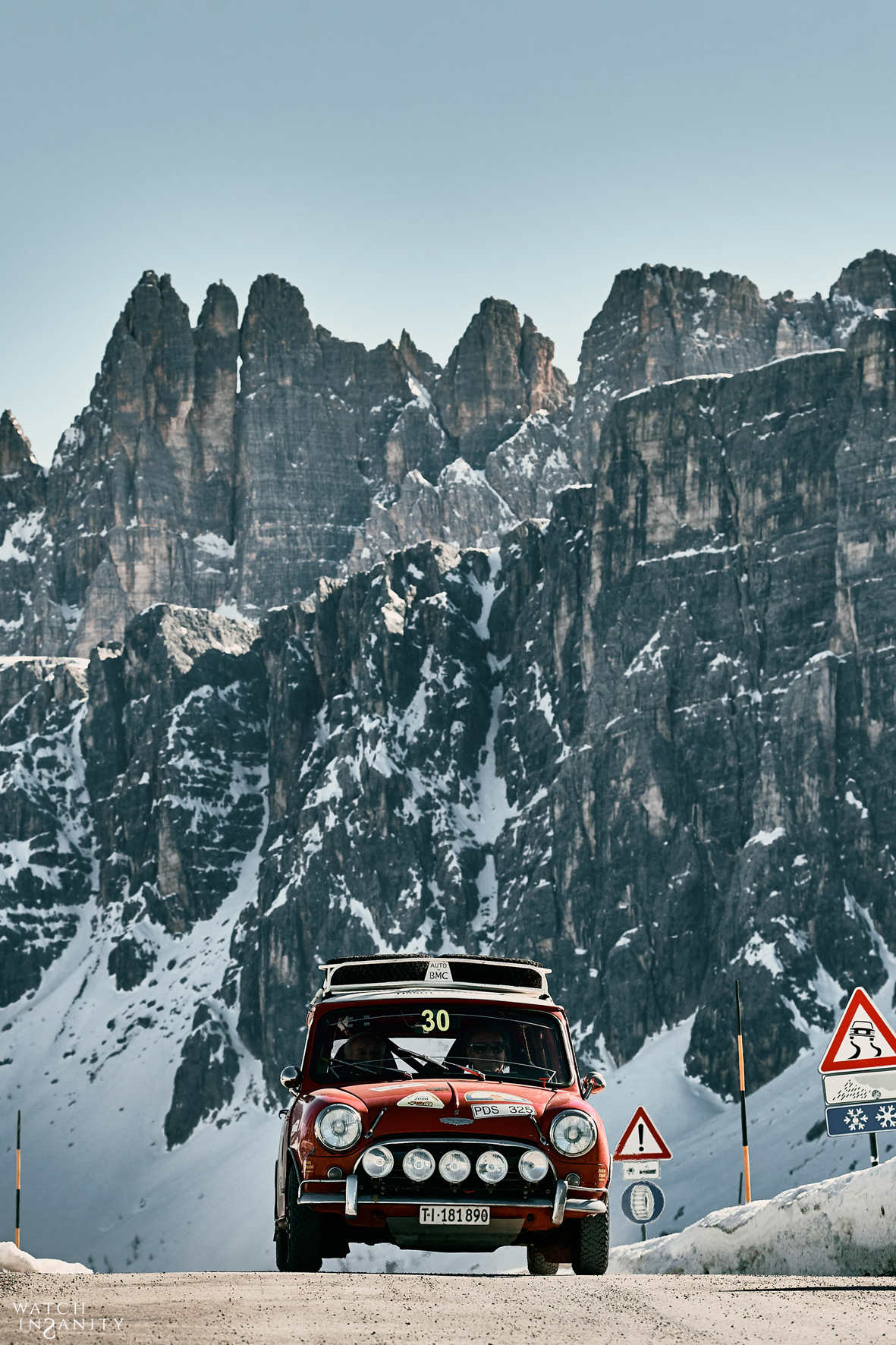 Paolo Cattagni, Girard-Perregaux Italia CEO, in team with Ruoteclassiche’s Chief Editor David Giudici, raced behind the wheel of a Porsche 56 A Speedster. 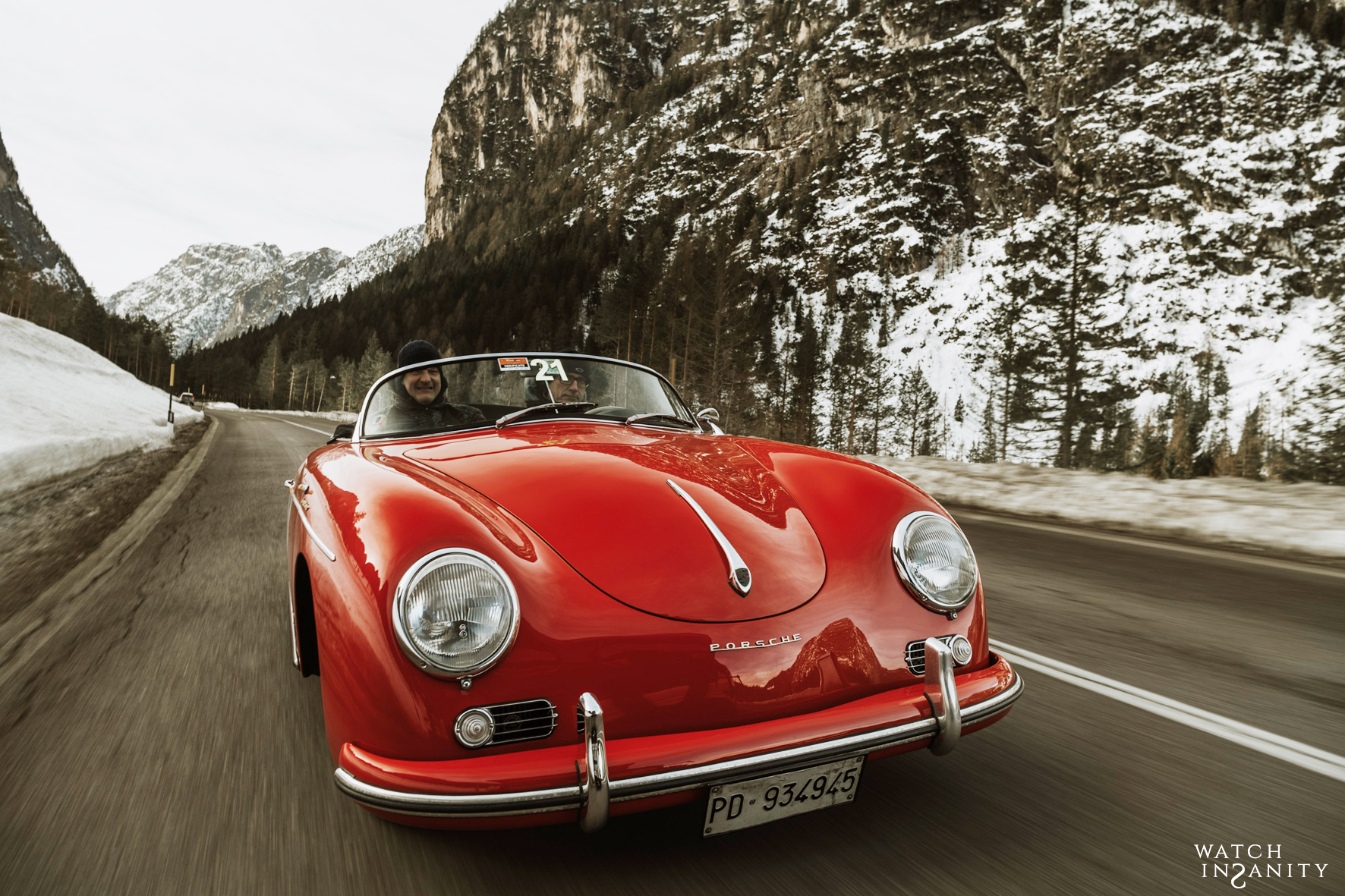 The brand chose this evocative event to introduce its new, exceptional timepiece “Quasar” – previously unveiled at Watches & Wonders in Miami – to the Italian public. The model represents a first for the Manufactory based in La-Chaux de Fonds: for the first time indeed the Neo-Tourbillon Movement Under Three Bridges in a skeleton version, released in 2018, can be seen entirely through a case made wholly of sapphire crystal. From there comes the name “Quasar,” which represents the brightest of the galaxies in astronomy. 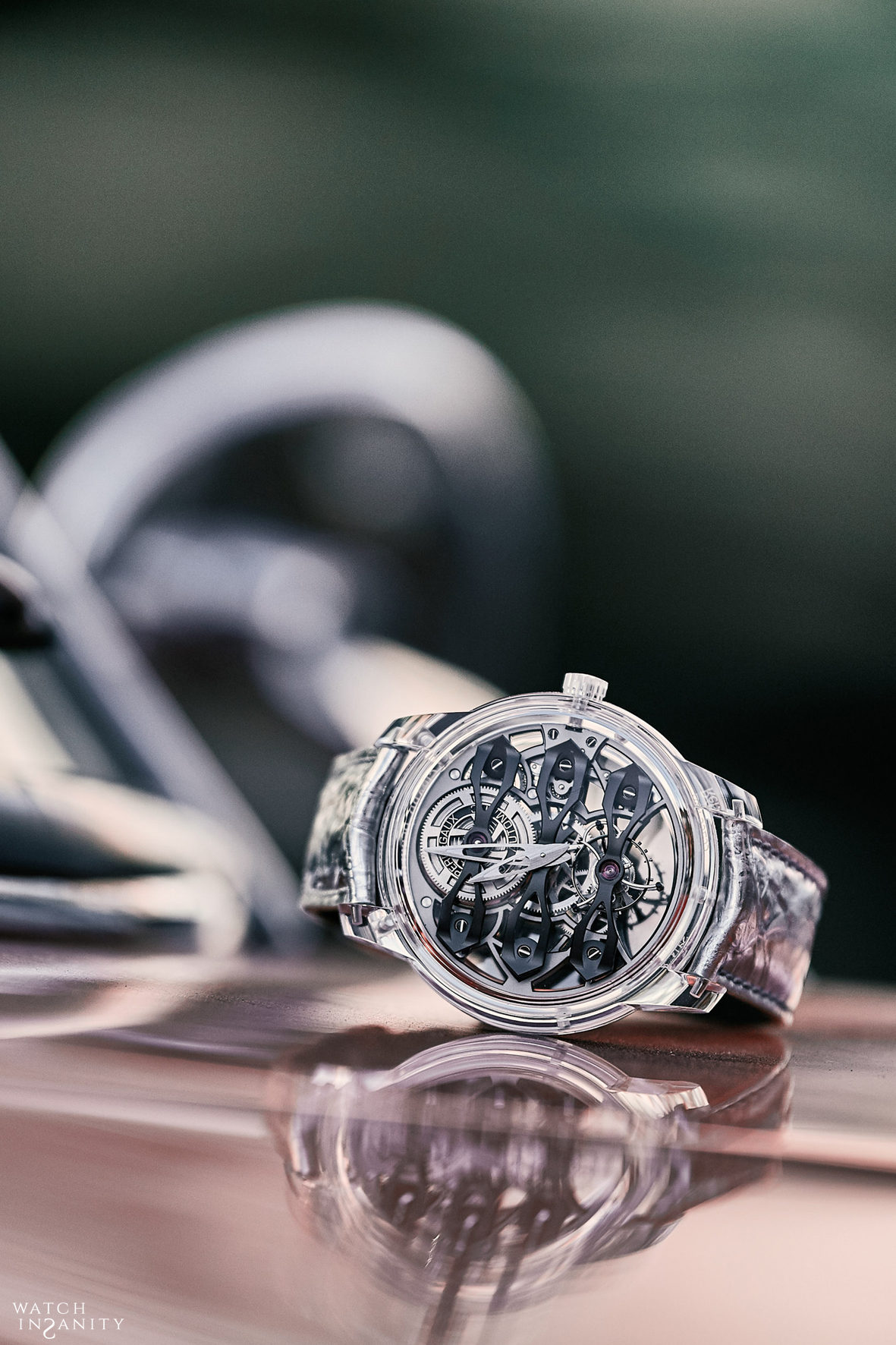 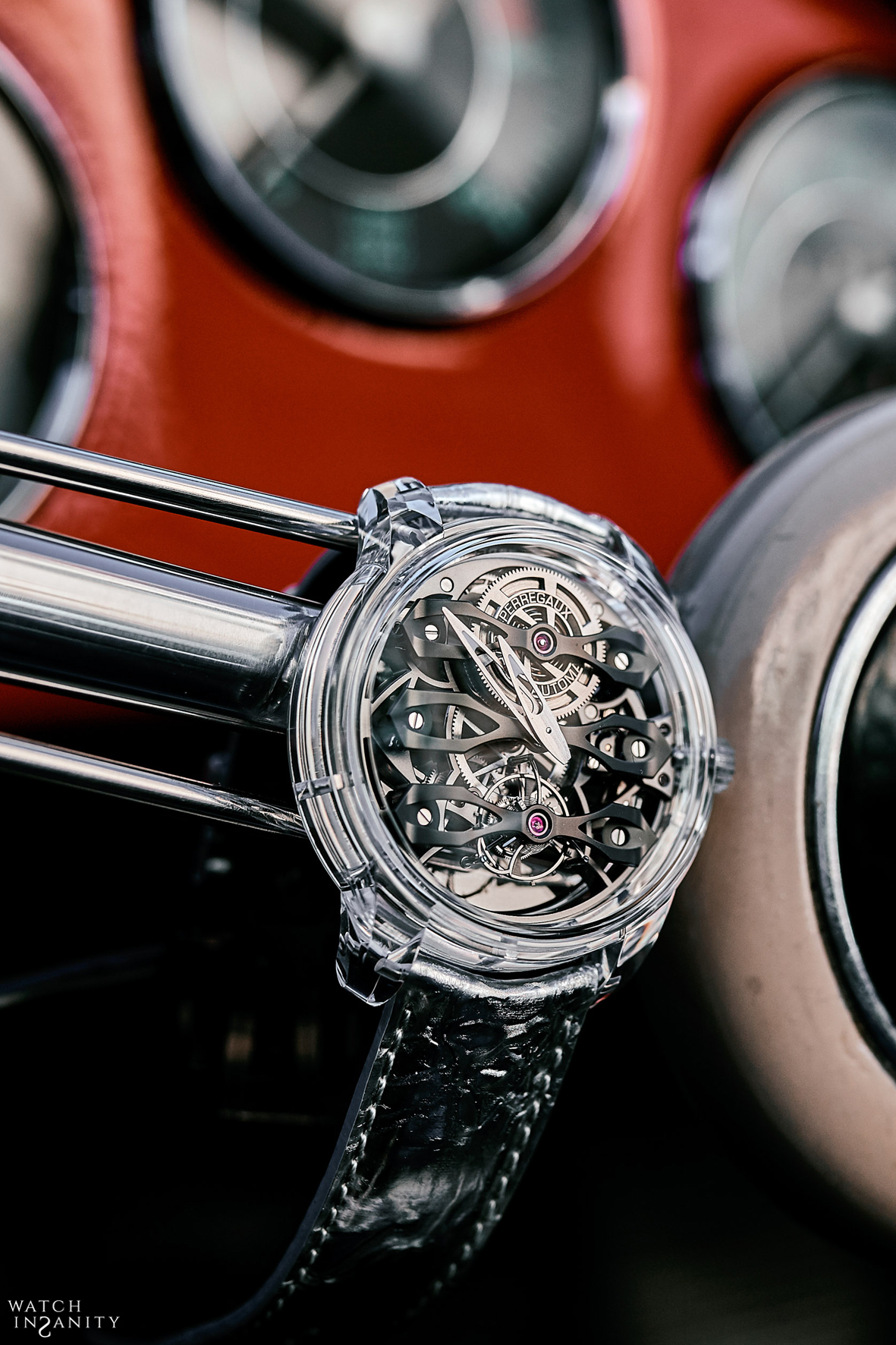 Under the auspices of a theme common to all collections of the brand, “Earth to Sky,” the Quasar model naturally applies four principles of the Girard-Perregaux universe. The first is the 1884 patent related to the Three Gold Bridges visible on the side of the dial: a signature of the Maison. The second is the manual skeletonisation created in the La-Chaux de Fonds laboratories. The third is the birth, in 2015, of the Neo-Tourbillon with Three Bridges, which were once arched, skeletonised and black. The fourth is the use of sapphire in a more technological way then usual for the Haute Horlogerie world. 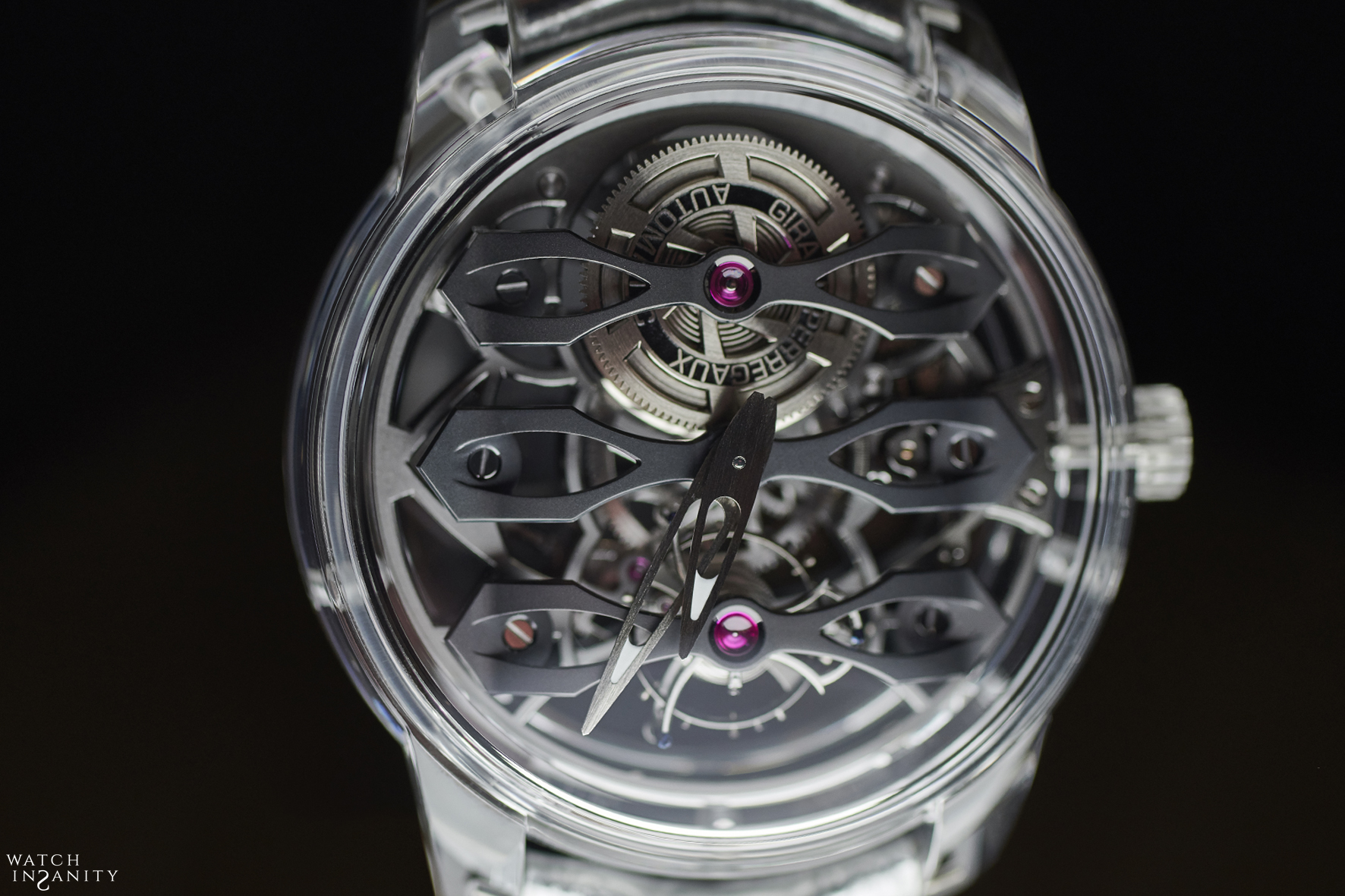 Back in 2007, thanks to the Laureato with Three Sapphire Bridges, the corundum crystal found a place within the structure of a Haute Horlogerie calibre.

At almost 3.000 Kelvin degrees, the fundamental particles melt under the pressure of an incandescent flux of oxygen and hydrogen. From this process the sapphire crystal is made. Later on, the material is sculpted, filed, perforated, curved, and polished with tools employing the hardest material in the universe: diamond. 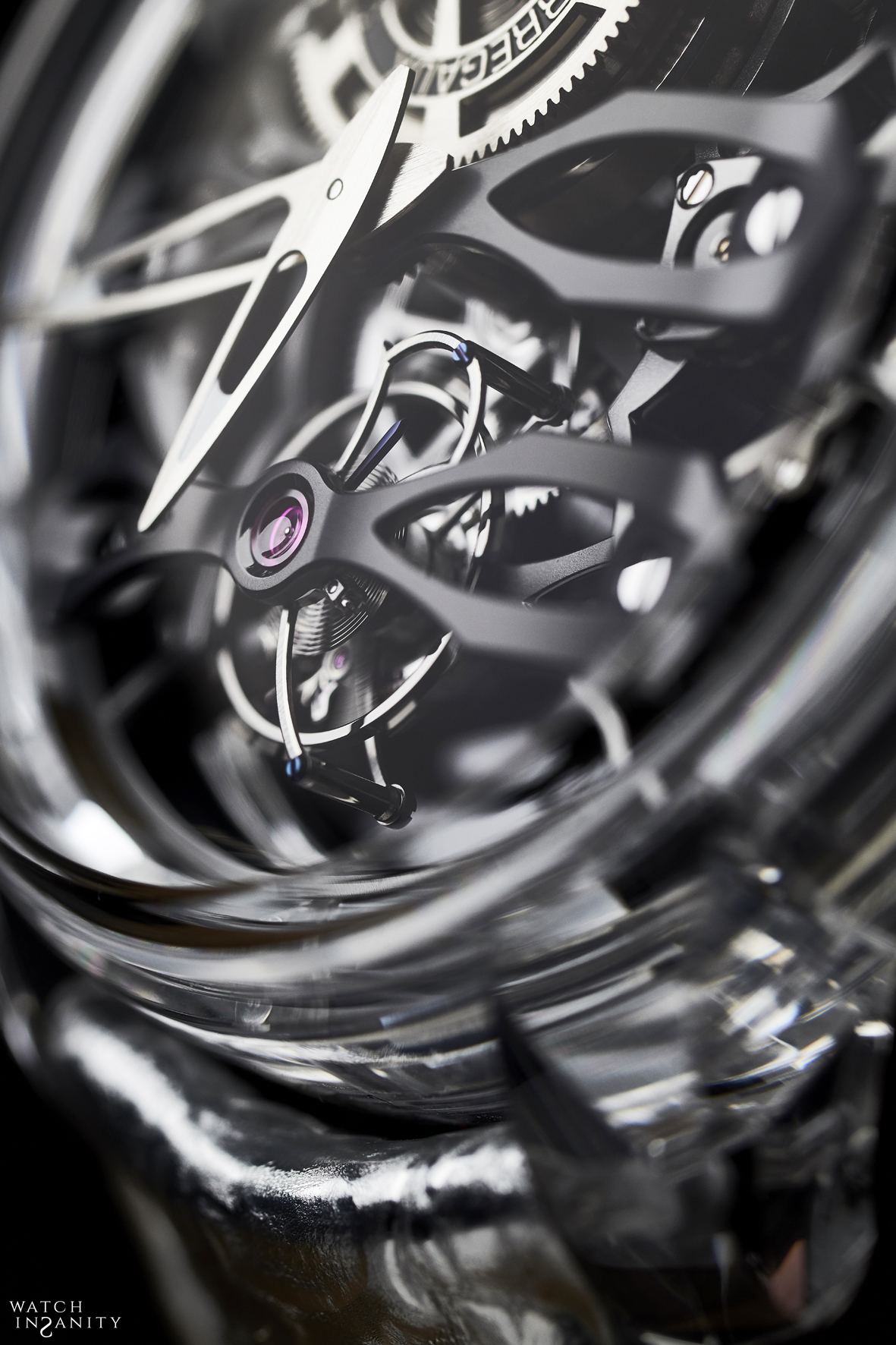 The Quasar case has a 45-mm diameter made entirely of sapphire crystal, and is  water resistant down to 30 meters. A crystal tube wraps the movement’s bridges while the middle is one unique piece, rounded on the sides and angular at the lugs.

The caliber GP9400-1035, automatic with Tourbillon, hours, minutes, little seconds and a 60-hour power reserve, is the evolution of the caliber 9400 – intended to make the platen disappear. The movement seems to be floating, just as if it was in the void. 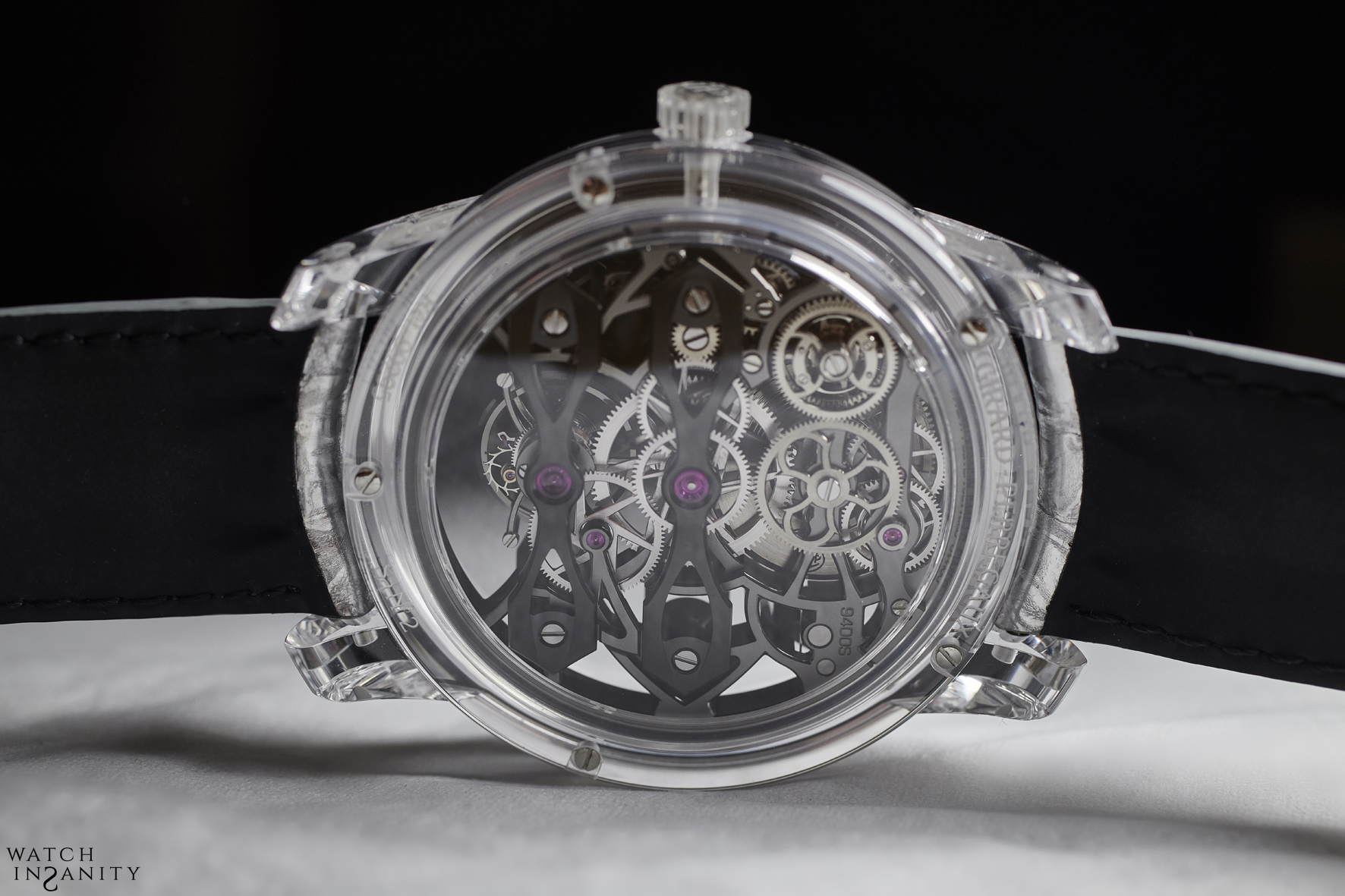 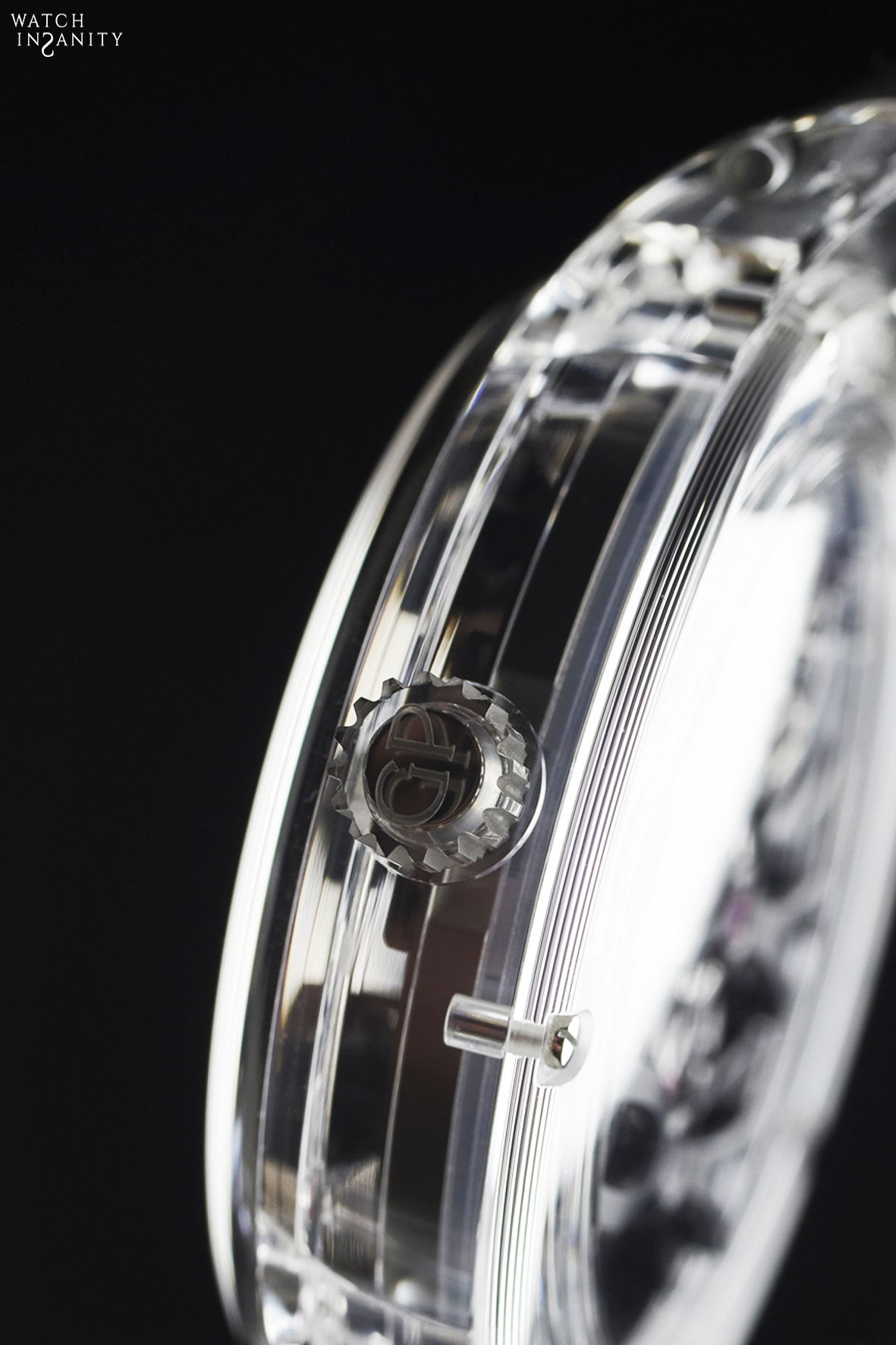 The bridges visually help the general transparent effect of the Quasar; they are made of titanium, sanded, and finally blackened with a PVD treatment.

A play of light and darkness, just like the Quasar – the ultra-luminous region at the centre of a galaxy accreting around a black hole – expressed  through the Manufactory’s art of Haute Horlogerie. Price €.199.ooo

A Tourbillon of emotions: The regulator invented by Breguet turn 220 years old